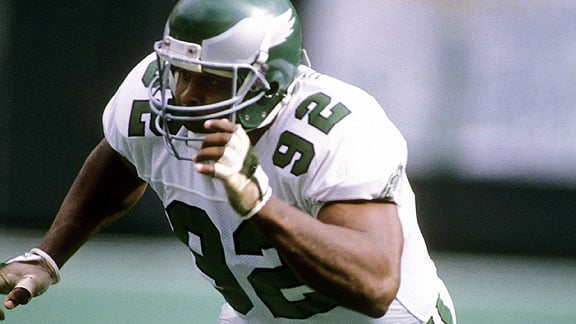 I showed up in Philadelphia in the second week of the 1992 regular season. The Eagles had the league’s best defense heading into that year after setting all kinds of records in 1991. The unit was coordinated by the highly respected Bud Carson and bolstered with Pro Bowl talent at nearly every position. But it was the big dog, Reggie White, who was the anchor and spiritual leader. The Minister of Defense.

Prior to playing with him, I played across from him in Dallas and in one game with the Colts. I always knew where No. 92 was, and he was always priority No. 1 because he could ruin the game on any given play. In Philly, I initially went up against him as a scout team player, forcing me to constantly practice like it was game day. It often led to a lot of fights over the years. But about three days in, White pulled me aside.

He said, in his deep, raspy voice:

“Baldy, I respect you, but this is how practice is going to go from now on. If my chin strap is unbuckled, you will not block me full speed. Now, if my chin strap is buckled, good luck trying to block me. You got that?”

Yes, sir. Watching White play on Sundays and Monday nights was like watching a super hero at the theater. His legendary hump move, where he would throw 350-pound men off the screen, was incredible. There was very little anyone could do to stop him when White decided to take over the game. He was hands down the most talented player I played with. He was a great teammate, humble player, fun like a little kid but also mature with all of his priorities congruently in order.