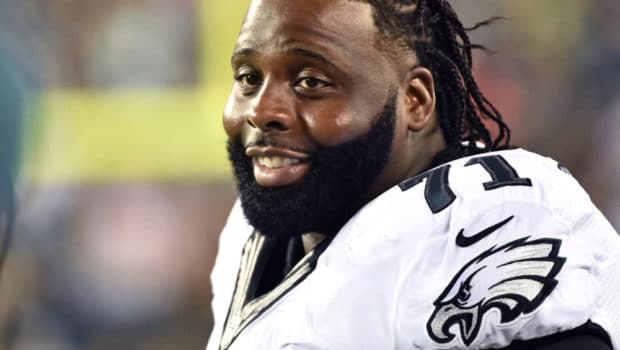 EAGLES LEGEND JASON PETERS: I’LL BE BACK, IN PHILLY OR SOMEWHERE!

Eagles left tackle Jason Peters will return for a 15th NFL season, whether in Philly or somewhere else.

“They hadn’t asked me, but I’m going to be back,” Peters said Monday when asked if he’s had any conversations with Eagles brass about his future. “Step out on a limb, if they don’t want me, I’m still somewhere.”

The 36-year-old tore the anterior cruciate ligament and medial collateral ligament in his right knee in October, the latest in a number of injuries over his 14-year career. Peters has missed time due injury in eight of his last 11 seasons, including all of 2012 after rupturing his Achilles tendon twice in the preceding offseason.

Despite those issues, his play has remained terrific. The 6-4, 328-pounder earned nine Pro Bowl selections between 2007 and 2016, missing out only in 2012, when he didn’t play. He was putting together another solid campaign in 2017 before his October injury.

“I’m playing good,” Peters told the Inky. “It’s not like I’m out there giving up a bunch of sacks or playing sloppy. I love this game and I’m going to go as long as I can.”

Peters added that his rehab is going well and he expects to be able to practice in June.

Peters signed a one-year extension last offseason, running his deal through 2019. He has a cap hit of $11.7 million in 2018, with the Eagles facing $6.3 million in dead-money charges if they choose to move on. The deal also includes a team option for $10.7 million in 2019, with $2.7 million in dead money incurred if it is not picked up.

Many have expected right tackle Lane Johnson to move to the left side if and when Peters departs, though the five-year veteran Johnson did not do so after Peters’ injury this season. Second-year lineman Halapoulivaati Vaitai stepped in instead, with Johnson staying on the right.

With a whole offseason to plan and prepare, it’s possible Johnson — whose $11.3 million average annual salary is $2 million higher than any other right tackle — would make the move to the left if the Eagles move on from Peters this spring.