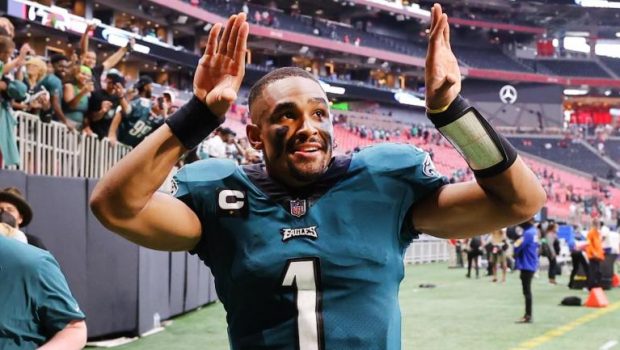 EAGLES LEADING NFC EAST WITH NINERS NEXT — VEGAS HAS NOTICED!

Don’t look now, but the 1-0 Eagles are leading the NFC East.

That’s because they waxed the Falcons on Sunday while the WFT lost to the Chargers, the Giants to the Broncs and the Cowboys last Thursday night to the Bucs.

The Eagles were a popular pick to be the worst team in the division this season but Nick Sirianni’s team was dominant against the Falcons on the road.

Here are the lines this morning:

The defensive line dominated the Falcons’ offensive line, Jalen Hurts was incredibly efficient and two of his three touchdown passes were pretty, tight window strikes, while DeVonta Smith showed out in his first NFL game with six catches, 71 yards and a touchdown.

Philly has a tough schedule through the early part of the season which should keep them from developing any sort of big lead in standings, but there’s a chance this team is a lot better than anticipated. Either that or the Falcons are going to be a four-win team this season.