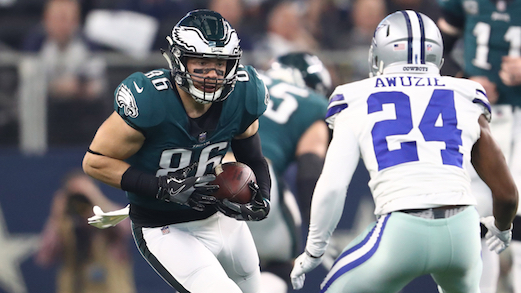 We’re at the quarter mark of the 2020 NFL season and while the Eagles lead the NFC East standings, they aren’t leading with the oddsmakers, who have the Dallas Cowboys still favored.

According to the best football betting sites, the Cowboys have a slight edge in the NFC East odds at -105 while the Eagles sit at +110 despite holding the lead in the standings. The Washington Football Team, tied with the Cowboys at 1-3 SU, is next at +1000 while the lowly New York Giants are +4000 at 0-4 SU.

Based on four weeks, making the Cowboys the betting favorites at anything may make you question what the oddsmakers are seeing but if you look at the upcoming schedule, Dallas’ fate should be determined within a month. That’s because the Cowboys have some “winnable” games coming up vs the Giants, Cardinals and Washington that could either see them go 3-0 or 0-3, with no in-between.

The Cowboys defense has been flat-out atrocious through four games, giving up 38 or more points in three straight (last in NFL in scoring defense) and putting themselves in such a hole there’s been almost no chance for a comeback. If Dallas can remedy its run defense (last in yards allowed) and be in a position to hold a lead instead of overcoming one, maybe they can win the division, but that’s a BIG if.

The current leaders in the NFC East standings at 1-2-1 SU, the Eagles seem to be turning the corner offensively, but defensively they’ve still got a way to go. Much like the Cowboys, Philly’s defense is near the bottom of the league in turnovers generated and turnover differential, which makes QB Carson Wentz look even worse since he’s already thrown seven interceptions, which ranks worst among all starting quarterbacks.

The next two weeks could determine how the Eagles fare the rest of the season because they’ve got matchups with the Steelers and Ravens, one undefeated team and another that is second on the oddsboard to win the Super Bowl. Philly can’t afford to be trailing Dallas in the standings since the Cowboys’ strength of schedule is easier than the Eagles’ comparing their remaining 12 games. Their matchup on November 1 in Week 8 will likely be appointment viewing.