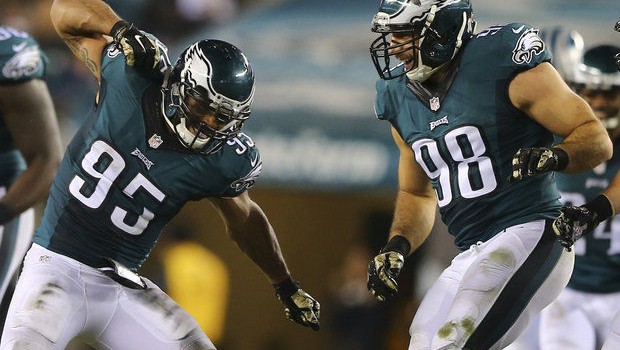 EAGLES LBS ARE SOLID, THOUGH RYANS’ AGE, INJURIES ARE AN ISSUE

Player movement is a constant in today’s NFL, especially when you are discussing the Eagles’ linebackers.

Playing in the 3-4 defense for the second season, this group did well in 2014 — very stout against the run and avoiding getting gashed for yardage on the ground as in years past.

Going forward, Mychal Kendricks, just 24 years old, is entrenched at one starting spot, hopefully for years to come. Connor Barwin also had a very productive year, making the Pro Bowl with 14.5 sacks. Both will be back for the 2015 season.

Trent Cole has $10 million due him for the 2015 season, and there’s been talk Cole might need to restructure the contract to stay in Midnight Green. It’s still up in the air, but Cole also was solid.

Brandon Graham is a free agent coming off a nice year and possibly could command some big bucks on the open market. He’s not a natural linebacker by trade, and I can see the Eagles letting him leave the nest.

An aging DeMeco Ryans situation gets murkier. On the high side of 30 years old coming off an ACL injury, Ryans was having a Pro Bowl caliber season when injury hit. He is due $6.8 million next year, so the Eagles have a tough decision to make. Ryans is also a locker room and fan favorite, and it won’t be easy replacing a character and productive linebacker that Ryans has been for several seasons.

The Birds most likely will cover themselves by picking a LB in the draft. UCLA’s Eric Kendricks, younger brother of the Eagles’ Mychal, will raise interest at the NovaCare complex.

A couple of free agents the Birds could snap up include 27-year-old Rey Manuluga of the Bengals; Brandon Spikes, who is also 27, will looking to move on after signing a $3.25 million one-year deal with the Bills last season.