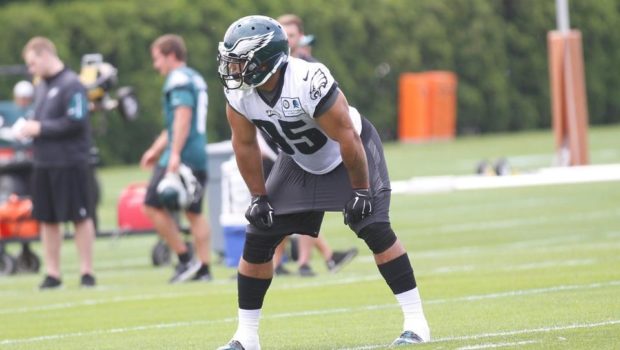 EAGLES LB KENDRICKS: ‘IF I STAY HEALTHY YOU’LL SEE ME IN PRO BOWL!

There is no getting around the fact that Eagles linebacker Mychal Kendricks had a disappointing 2015.

Maybe it was because he signed his four-year, $29 million contract extension during the preseason last year.

“I just feel like it was too much hot and cold with all the players rotating in and out,” Kendricks said yesterday. “No one was able to get in the flow. It was odd. I didn’t feel like I played as good or as much. For the time I was in, I feel like my numbers were okay. But it’s hard to be a force or something to reckon with when you’re not on the field.”

The linebacker, who said it was difficult to sit back and play part-time last season, emphasized the importance of playing more to get into a rhythm.

Kendricks has bulked up to 250 — his playing weight last year was 235 — in anticipation of his new role to take on offensive linemen more. He also likes the aggressiveness of the new scheme, but he isn’t sure why Jim Schwartz has had a lot of success with the Wide 9, whereas the Eagles struggled with it during Kendricks’ rookie season.

While Kendricks has been practicing at WILL during OTAs, he isn’t sure if he’ll exclusively play that or rotate in at SAM as the offseason progresses. Schwartz echoed that, saying it will likely take months for them to figure out how he’ll deploy his linebackers.

“I think that decision will be made as we go through training camp and go through preseason games, whether we’re going to play right or left, or whether they’re going to travel with a tight end or travel to the open side,” Schwartz said. “You know, there is something to be said for both of them. You can make it a little easier on a player if he flips, because he’s seeing the same looks. Even if it’s from the right or left, he’s seeing the same blocking schemes, just from a different side.

“Then again, you could look at it and say it’s easier just to line up on one side and get used to playing that one side and playing what you see. Too early to tell exactly how we’re lining up.”

Regardless of where he ends up, Kendricks is confident he’ll rebound this season.