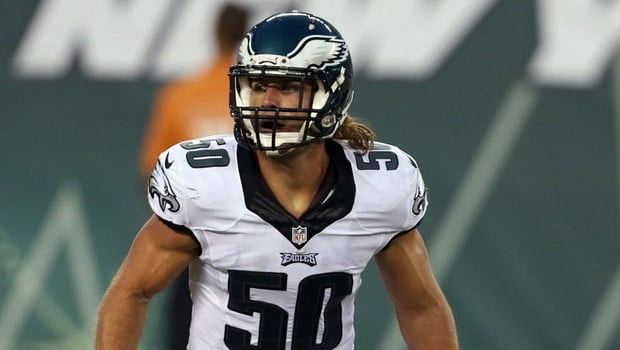 Eagles fans are sky high about the appointment of Jim Schwartz as Birds defensive coordinator under head coach Doug Pederson.

And Schwartz will have a not-quite-resurrection on his hands with linebacker Kiko Alonso, who didn’t actually play in Schwartz’s defense when the two were in Buffalo, but he did come to understand Schwartz’s schemes and concepts.

That’s why Alonso’s agent said the Eagles linebacker and former is “excited” about playing for Schwartz.

“I can tell you Kiko’s very excited about this defense,” agent Steve Caric told reporters this week.

Yes, well, what would you expect an agent to say?

Alonso was on the Bills when Schwartz was the team’s defensive coordinator in 2014. Alonso tore the ACL in his knee during training camp and never got to play in Schwartz’s defense.

Caric said though Alonso never played a down in 2014 under Schwartz, he attended plenty of team meetings and meetings with the defensive unit.

Alonso, was the NFL’s defensive rookie of the year after posting 159 tackles in 2013, third-highest in the NFL. He missed the 2014 season with the knee injury and then was traded to Philadelphia for Eagles running LeSean McCoy last March.

Alonso suffered a knee injury during training camp and missed three of four preseason games. He returned before sustaining another knee injury and missing five games during the regular season and finished with a disappointing 43 tackles in 2015.

“I don’t think any player that has an ACL is usually healthy for an entire year. I’m not trying to make excuses for anything and, quite frankly, I don’t think Kiko played as poorly as you guys (meid) made it out to be,” Caric said. “I think he had a solid year. Did he look like he did when it was his rookie year? No, but I think he was coming back and I think he’ll come back this year stronger and healthier.”