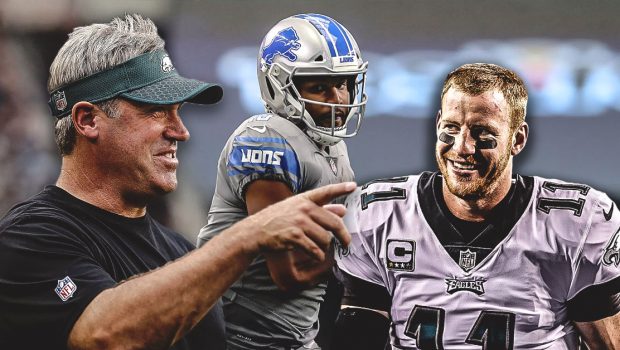 EAGLES LAUNCHING THE GOLDEN TATE ERA AGAINST THE COWBOYS!

The Eagles will launch their Golden Tate Era Sunday night at the Linc against the dreaded Cowboys, and they can’t wait:

“His ability to recognize and react to coverage,” coach Doug Pederson said yesterday. “He’s a smart guy, obviously. One of the things that you see on film with him is his first-step quickness, then when you see it in person, it shows up. We all know about the yards after catch. He’s strong, former running back, things like that.”

With the Eagles not adding a tailback at the trade deadline and with Darren Sproles experiencing a setback with his hamstring injury, maybe Tate will be used like the Patriots have been using Cordarrelle Patterson.

“Sometimes you don’t know about work ethic with different players, but being a veteran player, coming in here, embracing the offense, embracing his role this week, and what we’re asking him to do, he’s done a really nice job,” Pederson added.

Pederson’s effort to create the impression that Tate’s role will be limited could be aimed at getting the Cowboys to bite the hook. After all, Tate had eight catches for 132 yards and two touchdowns when he faced the Cowboys earlier this year. Pederson surely has studied the film of that game and drawn up plays based on the strategies that allowed Tate to have such a big day against Dallas.

In the end, Tate could make his first game with the Eagles a big night against Dallas.