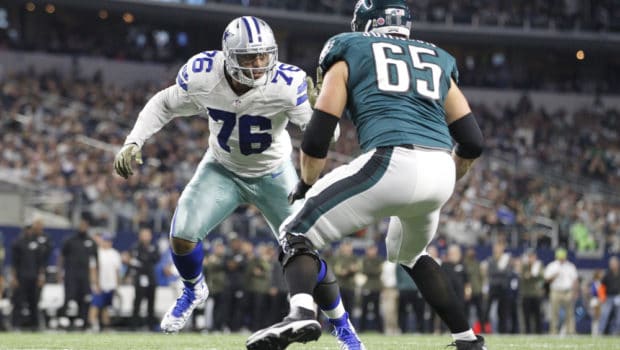 Right tackle Lane Johnson is about to start his fourth Eagles’ training camp, and the 6-6, 303-pounder has become one of the Birds’ most important starters.

Johnson is the left tackle of the future for the Eagles, and he signed a deal that guarantees a whopping $35.5 million.

The Eagles clearly think Johnson has elite left tackle talent, though he currently plays on the right side. Johnson will show his ability to play the left tackle position if Jason Peters goes down with an injury this season.

Johnson is a very good run blocker but has had some pass blocking problems when switching from right to left tackle. I believe this is simply a continuity issue because Johnson certainly has the talent to play both sides of the line.

In 2016 Johnson will continue to hold down the right side of the offensive line for the Eagles, but it may be his final year doing so.

Peters’ career is on a downward trajectory, and Johnson is really starting to come into his own as a tackle. Some speculate that this could be Peters’ final year in the NFL, as the 34-year-old was hampered by injury last year.

Next year, expect Johnson’s play to improve even more. The signing of Brandon Brooks, to play the right guard position, will be very beneficial to Johnson.

The Eagles guard positions were a huge liability in 2015 and at least one of those positions has been solidified by a high-level player in Brooks.

This will trickle down and help Johnson as well, as he won’t have to concern himself with the performance of the lineman next to him. Johnson is going to need to play well again in 2016, as the Eagles line struggled last year.

Looking beyond next season, Johnson is one of the most important players in the Eagles organization.

Once the aging Peters retires, Johnson will take over at left tackle. The left tackle position is one of the most important positions in football, as it protects the quarterback’s blind side.

The Eagles traded up twice to draft Carson Wentz. Johnson will be directly responsible for protecting Philadelphia’s investment from hungry defenders, for many years to come.

Johnson has shown in his three seasons in the NFL that he’s ready for the challenge.