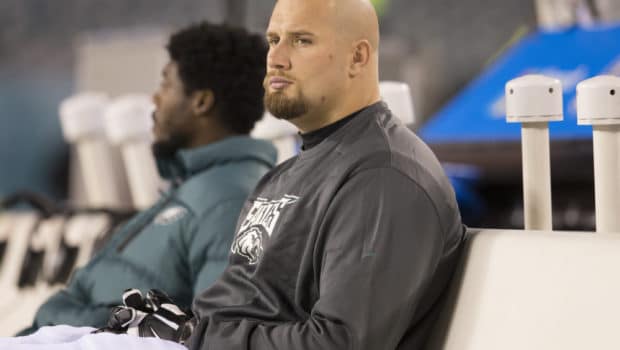 EAGLE LAME JOHNSON WHINES ABOUT ‘8 HOURS OF BICKERING’ ON PED!

Buried in the avalanche of yesterday’s first Eagles’ defeat, 24-23 to the Lions, was the fate of their right tackle Lane Johnson

Last week Johnson appealed his 10-game suspension for a second violation of the league’s PED policy, and a decision is expected later this week.

“It was eight hours of bickering back and forth and discussing league policy,” Johnson told CSN. “It just felt good going in there and taking it head on. It was mainly just a conversation on the policy [the NFL has] in place. It didn’t have to do with any substances, mainly just changing the testing procedures.”

Johnson said he let his lawyers do most of the talking in the NFL’s Manhattan office. He failed a test after taking a supplement which included banned peptides, though they were not on the label of the product he took.

“We put it all on the floor,” Johnson said. “We didn’t have anything to hide. I feel like we did all we could. There wasn’t a stone left unturned.

“Man, the thing was, just face it head on. We weren’t going to be intimidated by the NFL.”

Johnson’s suspension was reported during training camp, leaving him in limbo for the first four regular-season games. But if his suspension is upheld at its current length, he wouldn’t be able to return to the team until Dec. 22.