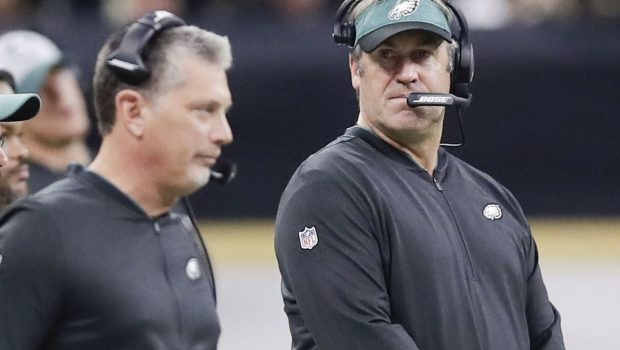 EAGLES LAME-ASS D-BOSS SCHWARTZ BLAMES HIMSELF FOR TWO DISGRACEFUL GAMES: NOW DO SOMETHING ABOUT IT!

Philly’s defense played like a unit sorely lacking in discipline on Sunday.

The Rams attacked them with frequent misdirection plays. Each time, the Eagles’ defenders bit hard and were caught out of place, yielding big gains through the air and on the ground.

Safety Rodney McLeod dismissed the notion that he and his teammates were ill-prepared, however, and said that the Rams’ game plan was “identical” to what the Eagles practiced for.

If that’s the case, the defense’s poor execution is even more troubling.

Jim Schwartz: "What happened on the field was I had a poor gameplan. …The whole sort of theme was to make it as simple as we could, and we had success with that in the past. In the effort to do that, we created a lot of conflict."

Schwartz: "We had some very experienced players make uncharacteristic mistakes. …When too many of those things happen, I don't blame the players. I blame myself."

One thought on “EAGLES LAME-ASS D-BOSS SCHWARTZ BLAMES HIMSELF FOR TWO DISGRACEFUL GAMES: NOW DO SOMETHING ABOUT IT!”