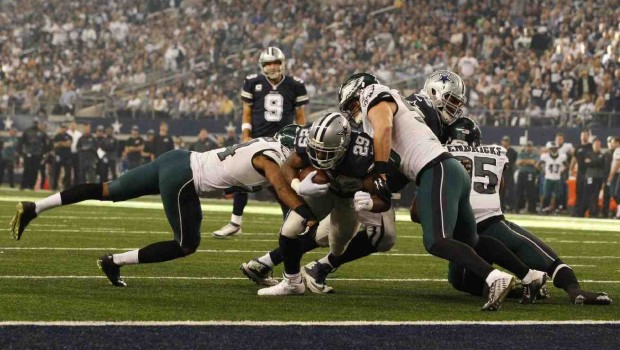 EAGLES ON THE DEC. 14 REMATCH: ‘THIS IS ONLY THE FIRST HALF’

If you want some perspective on the Eagles’ 33-10 blowout of the Cowboys, listen to the leader of the Birds’ defense:

”This is only the first half,” linebacker Connor Barwin said. ”We have them again in two weeks and we need to back it up again. The same way we did today, if not even better.”

The Eagles (9-3) opened with quick drives of 80 and 88 yards for touchdowns. They took sole possession of the division lead with four games remaining, including the Dec. 14 rematch.

”We’re not into statements,” Philly coach Chip Kelly said. ”We’ve given ourselves the opportunity to play meaningful football in December, and in this league, every week is a whole different deal, a whole different animal.”

McCoy, who led the NFL with 1,604 yards rushing last season, had his fourth 100-yard game in the past seven after going without one through the first five weeks. He secured his fourth 1,000-yard season since 2010, and the Eagles improved to 6-0 on Thanksgiving.

Although his deficit to Dallas’ DeMarco Murray in the rushing race is probably insurmountable, McCoy outgained Murray, who was held under 100 yards for just the second time this season.

Murray finished with 73 yards and Dallas’ only touchdown on 20 carries, the last a 6-yard loss when he was dropped by Mychal Kendricks on fourth-and-1 early in the fourth quarter.

”I don’t really compare myself,” said McCoy, who had a season-high 25 carries. ”I just try to be me. I don’t really get into that whole, especially during the season, who’s this, who’s that thing. In the big picture, we’re trying to win games.”

Things to consider after Philly won its first Thanksgiving meeting with Dallas since 1989, a 27-0 win for the Eagles in Jerry Jones’ first season as owner of the Cowboys:

The 34-year-old Tony Romo wasn’t around for last year’s playoffs-or-bust finale because he was two days removed from back surgery. This time he was trying to play in a quick turnaround for the first time – about 90 hours after a dramatic win at the New York Giants – and following yet another back injury.

He threw two interceptions and didn’t have a touchdown pass for the first time in 39 games as the Cowboys (8-4) dropped their third straight at home.

”It was definitely short just from the Sunday night coming to here,” said Romo, who was 18 of 29 for 199 yards. ”I don’t really think that had much to do with the outcome of the game. I think they just played better than us.”

Making his fourth start since Nick Foles was sidelined by a broken collarbone, Sanchez was 9 of 11 for 99 yards in the first quarter. That included a 27-yard scoring pass to Jordan Matthews when Sanchez hit the rookie in stride on a crossing route for a 14-0 lead.

Sanchez finished 20 of 29 for 217 yards with a touchdown and no interceptions two years after he was the starter for the New York Jets and infamously ran into the backside of one of his offensive linemen for a fumble that New England returned for a touchdown in a 49-19 Thanksgiving rout.

”It is like my favorite holiday, so that’s not cool,” Sanchez said. ”It was a bummer. The game plan was to try not to do that. And we accomplished that.”

This time, Sanchez had his first scoring run since Dec. 24, 2011, with the Jets – a 2-yarder after faking a handoff to McCoy on the zone read. McCoy set up the game’s first touchdown with a 38-yard run.