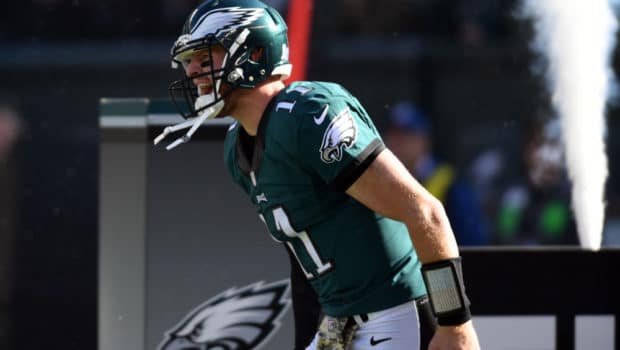 EAGLES’ KID CARSON WENTZ WILL HAVE TO CARRY TEAM TO PLAYOFFS!

So, Doug Pederson, do you really think that rookie quarterback Carson Wentz is ready to put the Eagles on his back and carry them to the playoffs?

“I think he is,” coach Pederson said yesterday. “We’ve had to do it already this year. He’s been able to . . . Forty-plus pass attempts and carry us a little bit down the stretch. So, he’s used to that. He’s accustomed to it.”

Though Wentz has experienced carrying the team, it hasn’t always worked out well. For example, he threw a late interception against the Lions that sealed the Eagles’ defeat. Though they were down just one point, Wentz took a shot downfield to Nelson Agholor that was intercepted by Darius Slay.

Wentz has seven interceptions and 10 fumbles this season. Luckily for the rookie, only two of those fumbles were recovered by opposing defenses.

Pederson was asked what he wants to see down the stretch out of the North Dakota State product.

“The biggest thing I think is just efficiency, being smart as a quarterback and understanding what we’re trying to get done from a game plan standpoint,” Pederson said. “Completion percentage, all that is factored in there. How well he moves the team, first down, staying on the field, good decisions on third down, protecting the football. Those are the things now down the stretch that you want to see from your quarterback and the leader of the team.”

Wentz started out the season very efficiently, with zero interceptions and no fumbles lost in the first three games. Since then, he has become a bit more careless.