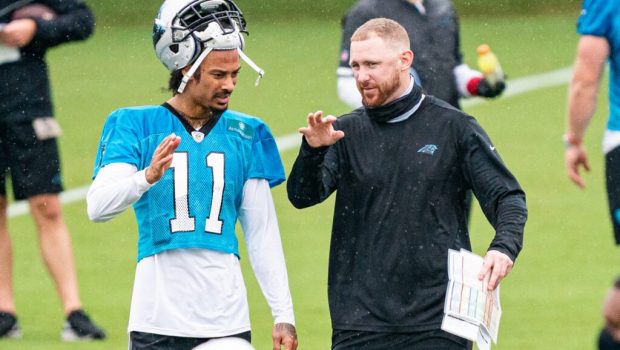 EAGLES KICK JOE BRADY’S TIRES: HE IS THE NEXT SEAN MCVAY?

So, the Carolina Panthers offensive coordinator Joe Brady was interviewed yesterday by the Eagles for the vacant head coach job.

He is the latest wonderboy who has come to Philly, which seems to be looking for the next Sean McVay even though the old Sean McVay hasn’t measured up lately to his hype.

The 31-year-old Brady was an offensive assistant in New Orleans from 2017-2018 before spending one year as the passing game coordinator at LSU, where he helped lead the Tigers to the national championship during Joe Burrow’s Heisman Trophy-winning campaign.

Matt Rhule hired Brady in Carolina last January, and the Panthers finished No. 17 in offensive DVOA in his first season as offensive coordinator. It’s been a rapid ascent for a coach who graduated from William & Mary in 2012 and was a Penn State graduate assistant from 2015-2016.

He’s also interviewed with Atlanta, Houston, the Chargers and the Jets. That’s evidence of how people around the league view Brady. It might be more noteworthy if the Eagles didn’t interview him. Unless Brady underwhelms in interviews, it appears he’s on a head-coaching track this year or in coming years even though he’d be the youngest head coach in the NFL. Then again, Sean McVay was 30 when the Rams hired him.

Brady is a bright play caller whose offense remained pretty dynamic, despite the absence of Christian McCaffrey for 13 games. Yes, the Panthers faltered in the red zone and in end-of-game situations, and some of those problems fell on Brady, either due to a questionable play call (giving the ball to Alex Armah vs. the Raiders in Week 1) or taking too long to decide on a play.