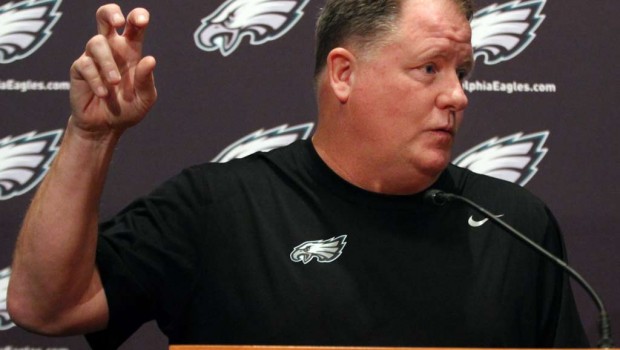 EAGLES’ KELLY MEETS THE PRESS, WHICH DOUBTS EVERYTHING HE SAID!

Eagles coach Chip Kelly hadn’t been heard from since Dec. 29 — 72 days! — so when he sauntered into the NovaCare press room yesterday you could have knocked over the assembled media with a feather.

The media had been left to its own devices in that vacuum and had come up with lots of rumors, never sourced, mind you, about:

Why Kelly would mortgage the future to move up in the draft and take his college QB Marcus Mariota.

Why Howie Boy’s office was moved — I kid you not!

Kelly said it was owner Jeff Lurie’s idea to elevate him and demote Howie Boy; chasing Mariota is ridiculous, and he had no idea why Howie Boy’s office was moved.

The same people who propagated the myth about Mariota coming to Philly immediately said they didn’t believe Kelly.

So, after bashing him for two and a half months for not speaking, they have shown why he doesn;t speak more often.

Because the “reporters” will write what they want anyway.

Two days into free agency, the Eagles remain the most fascinating story in the NF, and Kelly perplexed us Tuesday with his trade of Nick Foles for Sam Bradford because we had no clue what he was up to.

Kelly laughingly dismissed the notion of mortgaging the future to trade up for Mariota in the upcoming draft. Nothing anyone says this time of year is the truth but he was certainly forthright about it.

The craziest thing we heard yet though? That Kelly was offered a first-round pick for Bradford on Wednesday morning, i.e., after the trade to get him. Whoever that was, kudos to you for not understanding how economics or telephones work.

More importantly: Bradford is a huge winner out of free agency if he ends up being the starter for the Eagles in 2015.

Bradford succeeding is a plausible notion: Bradford dominated in a spread scheme at Oklahoma, getting the ball out quickly while running an up-tempo offense. But college was a long time ago for many of us, including Sam. It’s not fair to give him the benefit of the doubt just because he got slapped in a different system. He can’t be playing out the string in St. Louis and poised to explode in Philly.

So Bradford’s not a winner because of massive expectations for a huge season. But he is going from a questionable offensive system to one that let Mark Sanchez and Nick Foles produce impressive results. Pretty nice upgrade for him.