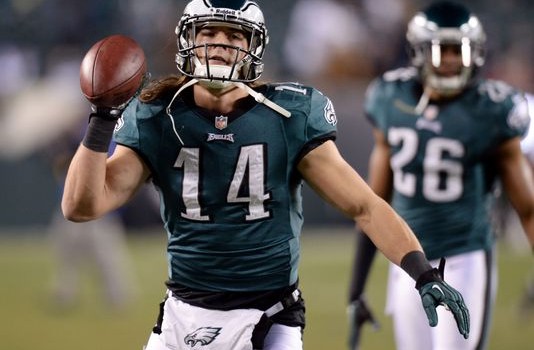 Riley Cooper is killing the Eagles.

The wide receiver who had a very good 2013 and was signed to a big, new contract, seems to have regressed in 2014.

He misses easy passes thrown by Nick Foles and one cost the Birds last Sunday’s game at San Francisco.

Is it time to bench him and move rookie Jordan Matthews out of the slot to fill his position?

Cooper is not injured. He isn’t limping around after injuring his foot in the preseason and his movement does not appear restricted in any way. Any player can have a bad couple of games but at this point it’s now a matter of confidence. Cooper is suffering between the ears and there’s no excuse given the competition he’s played against.

Philly has run the gamut when it comes to pass defenses. Four games is a small sample but they’ve seen a variety of toughness. Jacksonville is the worst pass defense in the NFL, but Cooper was awful against them. Indianapolis is not much better and he dropped several passes including a critical one in the end zone. Washington is mediocre and Cooper was awful again.San Francisco’s pass defense is pretty decent and Cooper looked way out of his league – he also dropped the game winning touchdown:

One theory is that the N-word incident from last year is haunting him. His teammates may have moved on and forgiven him, but I guarantee that opposing defensive backs have not forgotten and they’re using it to taunt him on the field all the time.

Cooper is a professional and he should be able to handle trash talking – but it’s not hard to imagine that he’s getting it about as bad as anybody in the game right now. There’s trash talk and then there’s trash talk – I have to think there’s a special level of malevolence going on there. Cooper’s confidence may be suffering as a result.

This is pure speculation of course. There’s no excuse for a receiver as talented as Cooper to be playing like this.