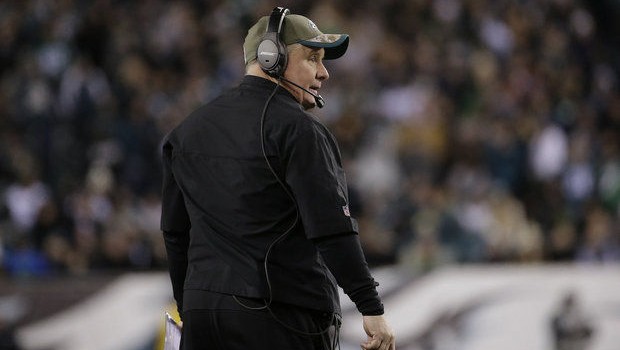 KELLY: NO BENCHING STARTERS — WE’RE GOING THERE TO WIN

The media were baying at Chip Kelly to admit something — anything — about the Eagles’ fall from grace and the NFL playoffs.

The team went from 9-3 to 9-6 and elimination from the postseason and there were fingers to point and blame to assess:

Surely, Kelly would take the opportunity in the run-up to this Sunday’s game at the New York Giants to play some scrubs.

No, thank you, Kelly shot back.

Kelly said he doesn’t plan to play backups or others who didn’t get much time during the year, including backup quarterback Matt Barkley instead of Mark Sanchez.

“Yeah, we’re not benching Mark,” Kelly said. “No. He went, what, 37 of 50? Let’s get that straight. We’re going (there) to win the football game. There’s no ‘hey, let’s go see what we can do.’ Our job is to go up and play the New York Giants and we’re going to do everything we can to beat the New York Giants.”

Kelly says players earn playing time. Those who play the best in practice get to play on Sundays. It doesn’t matter if the division title is on the line, or if it’s a game where the outcome has no playoff implications.

In Kelly’s world, there is no looking ahead to next year, not while there is still a game to be played.

“If they warranted playing time, and we’ve been with these guys since preseason camp, then they’ll play,” the second-year coach said. “But we are not going to turn around now and say because you haven’t beaten anybody out in the last 15 weeks, we’re going to let you play this week.”

Kelly would like to see the losing streak end and get a 10th win, even if it doesn’t come with a playoff berth, and at the expense of seeing some younger players.

“The upside is we’re going to win a football game and that’s what this whole organization is all about,” Kelly said. “It’s not about trying to see what the future is. It’s about we got a game. I would not be fair in any of my beliefs and I would not be fair to any football player right now if I said to some guy ‘Hey, I know you’re a better player, but I’m going to play a younger guy now.'”