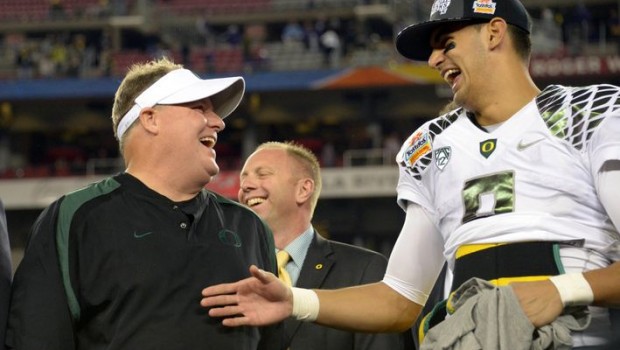 You have lived through the earthquake of the LeSean McCoy trade, the cuts of fan faves Trent Cole and Todd Herremans and the possibility that wide receiver Jeremy Maclin — who is a 2 but by far the best on this team — might get a great free agency offer on Tuesday and also be gone.

Does anyone out there really believe that Supreme Leader Chip Kelly would hesitate for a nanosecond to throw another grenade and move up to whatever spot it takes to draft Oregon QB Marcus Mariota?

Let’s see a show of hands.

He was the flavor of Kelly’s month more than two years ago when he was singing his praises during his interviews to be an NFL coach, according to Jason La Confora of CBSSports.com:

“People in contact with Kelly through his initial NFL coaching interviews say he gushed about Mariota even way back then, calling him the most talented player he had ever worked with, a tremendous kid and glowing quarterback whom Kelly believed ‘would win multiple Super Bowls.’ “

It was something Kelly said in private behind closed doors, but it speaks volumes about how Kelly feels about his former quarterback.

Pair this with the public comments Kelly has made about his former quarterback:

“He’s a special player and he’s just got a gift for playing football. He’s everything you want. He can throw the ball, he can run. He’s the most talented kid I coached in college.”

“He might be the fastest guy on the field. But his mind is even faster… thinks like Peyton Manning.”