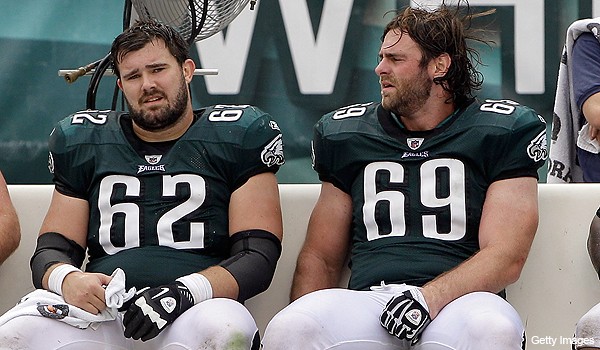 The return of Kelce (left) and Mathis will give the Eagles a big boost.

Evan Mathis let the cat out of the bag.

Or, should I say the Birds — two of them.

And then he buried the lead, a journalistic term meaning he didn’t even mention that he has been cleared to practice.

One by one the Eagles are returning to full health, some even sooner that expected.

Eagles guard Mathis, who is out with a knee injury, said Monday night during his weekly segment on Comcast SportsNet that teammate and linemate center Jason Kelce could return when the Eagles face the Texans in Houston, Nov. 2.

Kelce has been out since having surgery to repair a sports hernia shortly after the team’s win over the Indianapolis Colts, Sept. 15. The normal recovery for a sports hernia is six to eight weeks.

Six weeks would make it possible for him to play in the team’s game against Houston. If that happens it means he would miss just one more game, this Sunday against the Arizona Cardinals.

Earlier Monday linebacker Mychal Kendricks, who has also been out since the win over the Colts, wrote on his personal website that he would return to practice this week and expects to play Sunday in Arizona.

That leaves just Mathis. And the starting guard has maintained that he plans to return from his MCL sprain in time for the team’s Monday Night Football game against the Carolina Panthers, Nov. 10. That is also when he would be eligible to come off the injured reserve/returtn list.

And also on Monday Mathis was cleared to return to practice and will do so on Wednesday according to a report by CSNPhilly’s Geoff Mosher.

Evan Mathis is cleared to practice. Will practice Wednesday.

Mathis has been out of action since suffering an MCL sprain during the Eagles’ Week 1 victory over the Jacksonville Jaguars.

While this is certainly a positive step for the Eagles and a beleaguered offensive line that had been without Lane Johnson for the first four games of the season and has been sans Mathis and center Jason Kelce after both suffered injuries, Mathis is still not eligible to return to the 53-man roster.

It appears that Mathis is on schedule to return when he can be activated in Week 10 when the Eagles play the Carolina Panthers on Monday Night Football.

Until then, Mathis remains on the team’s injured reserve/designated to return list.