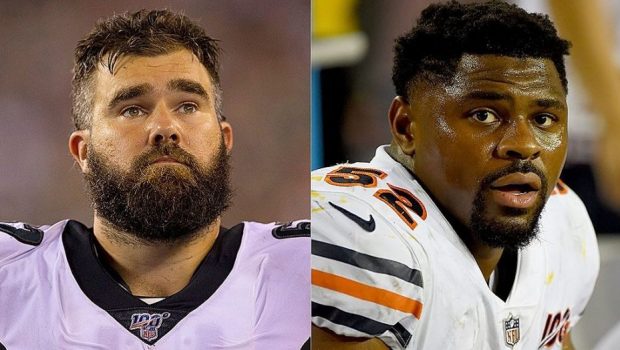 Especially in the National Football League.

The Eagles beat the Bears 22-14 Sunday at the Linc for Chicago’s fourth straight loss.

Although the defense got off to a slow start, linebacker Khalil Mack and Co. eventually pieced together an overall solid effort that held the Eagles to only 22 points but, in the end, lack of big plays on both sides of the ball combined with a slew of penalties to push the Bears to a 3-5 record.

In all, the Bears were flagged nine times against the Eagles for a total of 70 yards, and eight of them came in the first half alone.

For Mack, the yellow laundry that flooded the field early in the game was no coincidence. He points at tactics from center Jason Kelce in particular, that weren’t caught by the officiating crew but led to the Bears jumping offsides.

“You see the [b.s.] Kelce was kinda doing with the ball, just moving it a little bit,” Mack said, via the Chicago Sun-Times.

A center shifting the ball in any way prior to the snap constitutes a false start, by league rules. The Eagles had two false starts in the contest, but none were on Kelce. He was flagged just once all game, and it was for an offensive holding penalty.

The Eagles were flagged eight times in the game for 75 total yards — proving the officials were going after both teams equally on a macro scale — but the timing of the ones Mack is referencing also helped extend key drives for Carson Wentz.

He’s not looking to dodge accountability, but he also refuses to look the other way in the matter.

“Even then, you can’t really make no excuses,” Mack said. “That’s not the type of group we have. We’ve still gotta get there, regardless of what it is and what that was. All those offside penalties, it hurt us.”

He also notes he mentioned what he saw happening, but got no resolution.

“Yeah, you point it out, but who cares?” he said. “Who cares, man? You’ve gotta make plays and win ballgames. That’s what it’s all about.”

When asked about the alleged tactics by Kelce and the Eagles, coach Matt Nagy acknowledged there was something occurring, but stopped short of giving details that could potentially land him a hefty fine from the NFL. Instead, he wants everyone to know he saw some things that add credence to Mack’s complaint, but that’s where he’ll draw the line.

“I know what it was,” Nagy said. “There was some stuff to that. I’m not gonna get into that.”