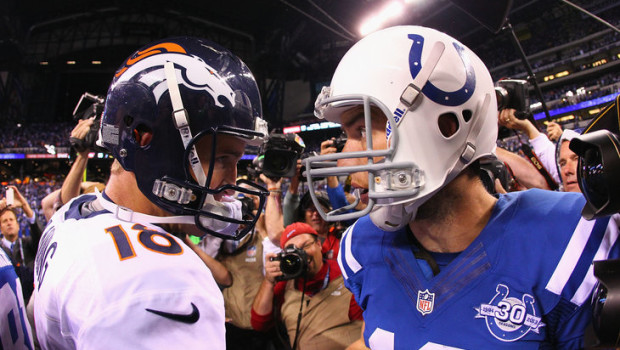 It is the job of every NFL coach to hype the team he is playing next.

And Eagles coach knows how to play that game.

Kelly has seen Colts quarterback Andrew Luck play plenty of football and he is comparing the third-year quarterback to some of the game’s elite.

While at Oregon, Kelly posted a 2-1 record against Stanford teams quarterbacked by Luck, but it wasn’t the win/loss record that stood out to the Eagles head coach as he continues to square off with Luck once again Monday night in Indianapolis.

“What separates Andrew from a lot of other quarterbacks is he has the ability to extend plays not only by staying in the pocket, but he can hurt you running the football. He had a lot of 50 plus runs in college and that’s kind of a weird thing for any quarterback that size. Usually you get a smaller quarterback who’s really nimble and can use his feet and those things but when you look at him, the first thing that ever strikes you is his how big he is in person.”

Beyond Luck’s physical gifts that have been on display in his first two full NFL seasons, passing for 8,566 yards, 48 touchdowns and 29 interceptions through his first 33 NFL games, what sets Luck above so many other quarterbacks in Kelly’s opinion is his mental sharpness and ability to diagnose just about everything a defense tries to do against him on the football field.

“He’s one of the most intelligent guys that we face,” Kelly emphatically stated. “He’s in that Peyton Manning, Tom Brady, Drew Brees category from a mental standpoint and that’s why in every game they have a shot.

“The comeback against the Chiefs [in the playoffs last season] when they were down, even last Sunday night when you fall asleep at 24-7 and say the Broncos have a victory and then all of a sudden the Colts are kicking an onside kick to try and win, it’s, he can do it all. The more experience he gets, I think he has the most comebacks for any QB in the league in the fourth quarter over the last two years. I don’t think there’s anything you can throw at him that he hasn’t seen and he really has the whole package and it will be a real big challenge for us this Monday night.”

In his brief NFL career, Luck has already led the Colts on eight fourth quarter comebacks and commanded 11 game-winning drives.

The moral of the story here is that if the Eagles have a lead late against Indianapolis Monday night, they can ill afford to take their foot off the gas pedal against Luck and the Colts.