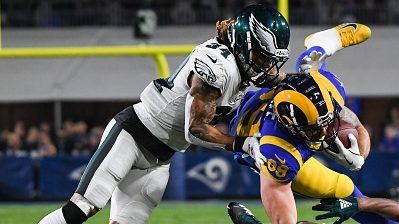 The Eagles re-signed cornerback Cre’Von LeBlanc this morning, less than 24 hours after he was released.

They claimed running back Jason Huntley off waivers from the Detroit Lions yesterday and needed to open a roster spot.

Since he is a vested veteran, LeBlanc was not subject to waivers and could sign with another team immediately.

The Eagles knew that they were going to place players on Injured Reserve, but to be eligible for short-term Injured Reserve (can return after missing three games) that player had to be placed on IR after 4 PM (or their season would have been done).

The Eagles did just that, placing safety Will Parks and wide receiver Quez Watkins on Injured Reserve late yesterday afternoon. That opened up two roster spots, one for LeBlanc. The Eagles also have an open spot on the practice squad.

If the Eagles waived a non-vested player, that player would have been subject to waivers.