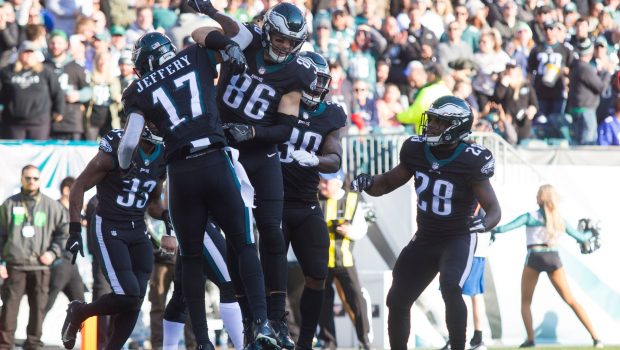 EAGLES JUST A GAME OUT IN THE NFC PLAYOFFS DASH!

The Eagles’ 25-22 win over the Giants yesterday at the Linc improved their record to 5-6, one game behind the Redskins and Cowboys in the NFC East.

Here’s a breakdown of the NFC playoff possibilities:

1. New Orleans Saints (10-1): Saints have inside track to home-field advantage but begin stretch of three in a row on road Thursday night in Dallas.

3. Chicago Bears (8-3): NFC North leader. Enjoying mini bye after Thanksgiving win, though apparently no guarantee it will be sufficient amount of time for Mitch Trubisky to be ready for Week 13 (at Giants).

6. Washington Redskins (6-5): Wild card No. 2. Carolina has now lost to Washington and Seattle, but Redskins get the spot (instead of Seahawks) for time being due to better record in NFC games.