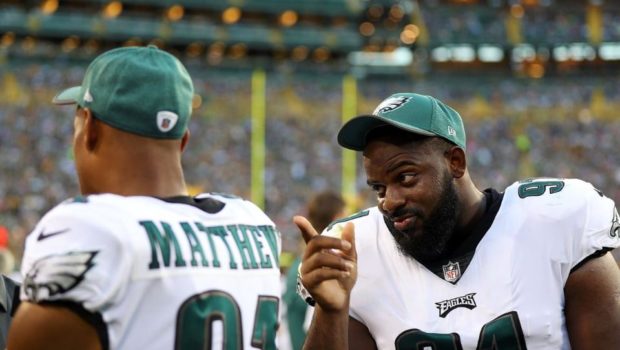 EAGLES AND JORDAN MATTHEWS BOTH WON IN YESTERDAY’S TRADE!

Now they have a promising option at cornerback in both the short term and long term in Ronald Darby, who was stunningly effective during his debut season in Buffalo before slipping badly last season. Defensive coordinator Jim Schwartz has done excellent work with undersized corners in years past, notably launching Cortland Finnegan’s career in Tennessee. It’s too early to suggest Darby’s a reclamation project, but dealing a wide receiver the Eagles were unlikely to sign for a likely starter at cornerback is a totally logical move, even if it did hurt to give up a third-round pick in the process.

It’s clear that Matthews is going to get far more targets in Buffalo than he would have in Philly, where he was competing with Alshon Jeffery, Torrey Smith, Darren Sproles and a bevy of tight ends for targets. Now Matthews will be the primary focus of a receiving corps that includes second-round pick Zay Jones, the newly signed Anquan Boldin, a limited Charles Clay and LeSean McCoy: