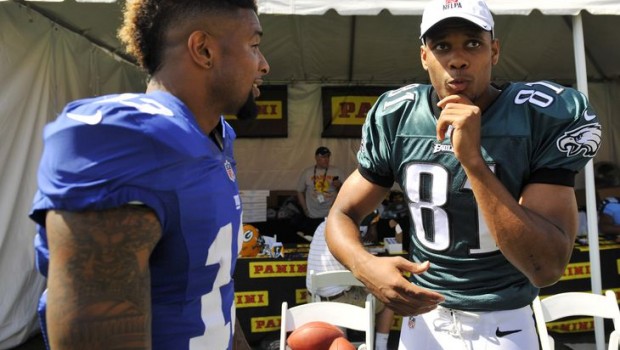 Jordan Matthews had a fine rookie season with the Eagles, finishing with 67 catches for 872 yards and eight touchdowns.

And now he is planning to train with another rookie — the Giants’ Odell Beckham — to make himself even better in 2015.

After the Eagles beat Beckham’s Giants 34-26, Matthews revealed that he plans to spend the offseason with Beckham — whom Birds’ coach Chip Kelly rated as the top receiver in the 2014 draft — training with the fellow rookie to prepare for their sophomore season.

“We are going to spend some time in the offseason training together for a couple months. We are going to fly out together and kick it,” Matthews said. “Me, him, Jarvis (Landry)…I think Julio (Jones) is going to be out there too.”

Both Matthews and Beckham had big games in the team’s showdown on Sunday, but it was the Giants’ rookie who stole the spotlight. Beckham finished with 12 receptions for 185 yards and a touchdown, lighting up an Eagles’ secondary that went into the game with the sole purpose of stopping him.

“I’m very impressed with his game,” Matthews said after watching from the sideline.

After Sunday, Beckham will end his rookie season with 91 catches for 1,305 yards and 12 touchdowns.

“Before he even had any 100 yard games, I knew he was a dog,” Matthews said of Beckham. “Unless you really watched LSU, you would have no idea he was going to do what he is doing because they ran the ball so much.”

In fact, Matthews said that Beckham’s lack of touches at LSU was a joke between the two SEC products during their college days.

“It was funny because when I was at Vanderbilt, we used to train together and joke about how I got the ball all the time and (he) got like three passes a game,” Matthews said. “Now the roles are reversed. And a guy like that, when he gets those kinds of targets, he earns them and deserves them…I would give him the targets too.”

Heading into Sunday’s game, Beckham had been targeted 108 times in 12 games, compared to just 88 times in 16 games for Matthews. Still, despite not having the big role that Beckham inherited with the Giants, Matthews did finish the season with 67 catches for 872 yards and eight touchdowns.

Matthews would not reveal what the two plan to work on, or if Beckham planned on teaching the Eagles’ rookie the tricks of the one-handed catch.

“I’m impressed by him and I love his game,” Matthews said, “We inspire each other. We just have to continue to get better.

One thought on “EAGLES’ JORDAN MATTHEWS — TRAINING WITH THE ENEMY”