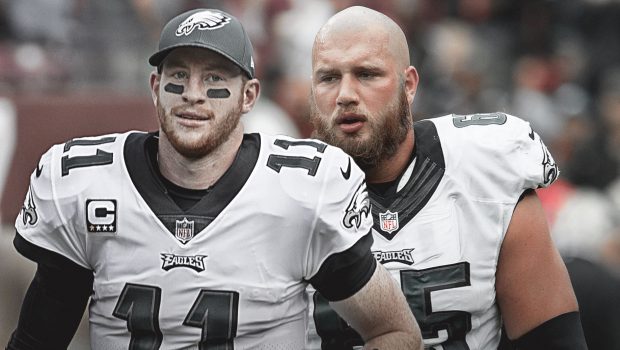 EAGLES JOHNSON TO WENTZ: I GOT YOUR BACK, BRO!

Eagles offensive tackle Lane Johnson has never been shy about standing up for quarterback Carson Wentz.

He even bashed ex-Eagles QB Donovan McNabb this offseason for questioning Wentz.

Johnson said Wentz, who has been rehabbing a back injury this offseason, is working hard to be ready to go for, hopefully, a full healthy season.

“I love it, every day when I go in the building, all I see is him in there before everybody else, rehabbing, doing whatever it takes.” Johnson said on NFL Network. “I just think he’s really on a different mental state than he’s ever been as far as training and ignoring distractions and really trying to be the best player he is. So, I just see that worker and a guy who is about to do some big things this season.”

For two straight years Wentz has been hurt and Nick Foles has been leading the Eagles in the playoffs. But the Eagles showed by signing Wentz to a contract extension that they believe he is the future of the franchise. Johnson believes that too.