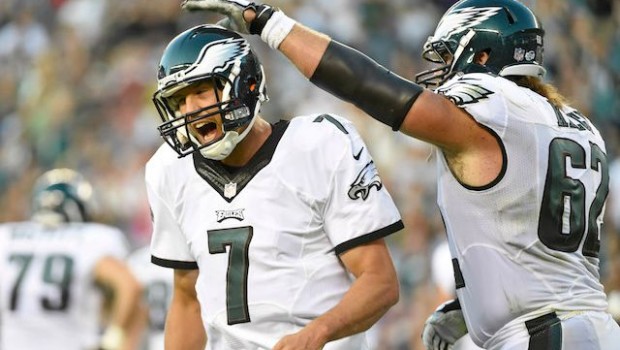 EAGLES’ JENKINS: QB BRADFORD CAN TAKE US TO THE SUPER BOWL!

Eagles safety Malcolm Jenkins has become a leader on and off the field, and he is an outspoken fan of quarterback Sam Bradford:

He thinks the much-maligned QB is a leader who can take the Eagles far — if they re-sign him!

“If you protect Sam and give him weapons to use,” Jenkins said yesterday on Comcast SportsNet, “I think he can be one of those quarterbacks to win a championship.”

“I think it was kind of a tale of two seasons for Sam,” Jenkins said. “Early, especially in the first half of the season, I don’t know how comfortable he was in the locker room or being in the role of the leader on the team when he had just gotten here.

“He’s got new guys. Then he got hurt, and when he came back, he decided to take the team by the horns basically. He really started to be a lot more vocal, he started to break down the huddles, he started to speak to the team before every game.

“When he did that, he gained the trust of the teammates and he started playing better. The back half of the season, he played really well for us.

“So, from a player’s perspective, we definitely got behind Sam in that back stretch and really would like to see him back moving forward. We think he can be the leader and the quarterback that we need.”

Through seven weeks, Bradford completed 62 percent of his passes (27th out of 29 qualifying quarterbacks) and had a 76.4 passer rating (also 27th-best). He threw nine TDs and 10 interceptions during those seven games and was dead last in the league at 6.45 yards per attempt.

But from Week 8-on, Bradford was one of the hottest quarterbacks in the league. He completed 68 percent of his passes, fourth-highest during that span, and his 97.0 passer rating was ninth-highest in the league over that period as well. He had 10 touchdowns and four interceptions during that stretch, winning four of seven starts. His yards per attempt went up to 7.59, 11th-best out of 31 qualifying QBs.

But Jenkins said the difference he saw in Bradford as the year went on went beyond his stats.

“It was clear at that moment that this was his team and he was going to take it over. Everybody needed that from him. It was that last boost that we needed. Although it didn’t necessarily translate into wins, it definitely translated into us playing with a lot more trust, playing together a lot more. It’s what you want to see out of your quarterback.

“Obviously every offseason you are going to run into the business part of football,” he said. “That all comes down to money and dollars and that’s something that as players, we don’t get into. It’s not our decisions.

“We look up after the draft and see who we have on our team and we move forward with that.

“Hopefully we can get Sam here. Like I said, I think everybody believes that he can be the quarterback and the leader that we need to take this team to a championship.”

The Eagles can tag Bradford at a cost of about $20 million for one year or sign him to a long-term deal presumably worth $18 to $20 million a year.

“I don’t get into numbers,” Jenkins said. “If I’m trying to win a championship and I think he’s the quarterback, then I’d pay him.”