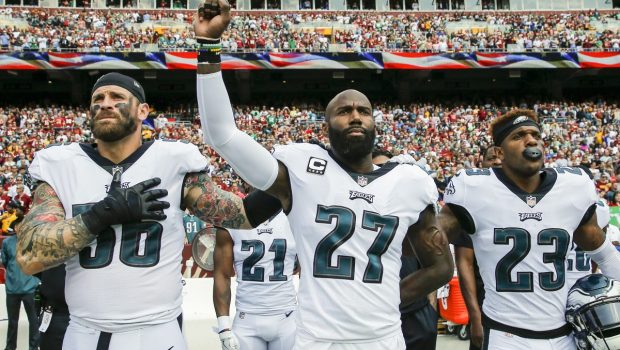 EAGLES JENKINS ON KAEP WORKOUT: NFL MAY BE COVERING ITS ASS!

Eagles safety Malcolm Jenkins has some thoughts about the NFL’s offer to host a workout for Colin Kaepernick.

And the more he thinks about it, the more dubious it seems to him.

“There’s been plenty of quarterbacks hurt [this] year already. Why now?”

While Jenkins and Kaepernick have been at odds in the past over methods (via Kaepernick’s friend Eric Reid), Jenkins was one of the first players to join Kaepernick in his protest of racism and police brutality, and is clearly in his corner.

But Jenkins also wonders if this workout is merely legal cover for the NFL.

“I mean, hopefully, it’s for real,” Jenkins said. “Hopefully he can show them he can play. That he can throw. That he’s in shape.”

But like many others, Jenkins is not sure it’s an honest chance at the job that has been kept away from Kaepernick for so long already.