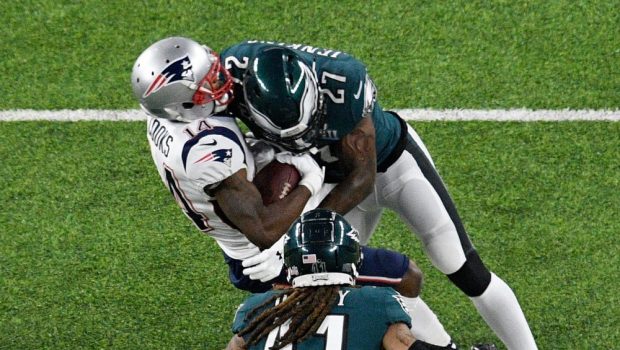 So, Malcolm Jenkins, what’s up with your absence from Eagles OTA’s?

True, they’re voluntary, and several other top Birds have missed them in the past.

But when a team leader like Jenkins doesn’t show, it’s news.

Or at least what passes for it in late May.

Everyone assumes he’s missing because of his contract — he’s signed through 2022, but he has no guaranteed money in the final two years of his deal. At an average annual salary of $8.75 million, Jenkins is the ninth highest-paid safety in the NFL.

He has been selected to the Pro Bowl the last two seasons, and three of the last four. Jenkins also played every snap last season.

Coach Doug Pederson would only confirm that Jenkins is staying away. The workouts are voluntary up until the mandatory minicamp from June 11-13, when players can be fined for their absence.

“I’m not going to get into any personal conversations that we’ve had,” Pederson said. “It is a voluntary program and Malcolm is one of those guys, a leader of the football team. I’m not concerned with him.”

Jenkins’ absence means that all four of the Eagles’ starting defensive backs won’t be practicing this week. Ron Darby, Jalen Mills and Rodney McLeod are recovering from injuries suffered last season, and aren’t expected back until training camp in late July.

That means plenty of opportunities for Sidney Jones, the Eagles’ second-round pick in 2017 who has missed most of his first two seasons with injuries. Jones, who missed several games last season with a hamstring, is fully cleared for OTAs.