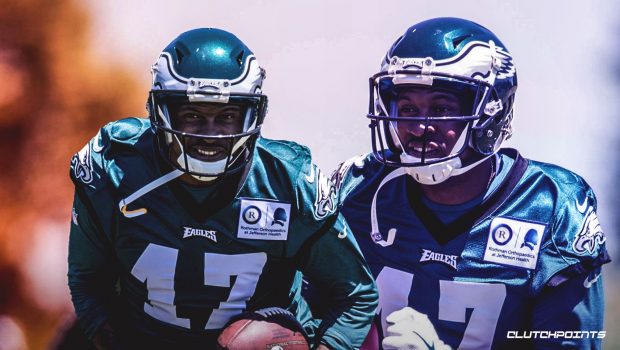 EAGLES JEFFERY AND GOEDERT A GO AGAINST THE PACK!

The Eagles won’t have wideout DeSean Jackson, who is still bothered by a groin pull, when they play the Packers tomorrow night in Green Bay.

But it’s looking like Alshon Jeffery and tight end Dallas Goedert will be available, according to ESPN’s Rob Demovsky.

Eagles head coach Doug Peterson said that he was optimistic about the players being ready to go:

“I fully expect and anticipate Alshon, you know, to [be available]. He was limited yesterday and hopefully he can go full today and be ready to go,” Pederson said yesterday.

Goedert played in the Lions game last Sunday, but is dealing with a calf injury that threatened to keep him out last week.

When it comes to the likes of Jackson, however, Pederson doesn’t anticipate him playing.

“… DeSean is probably a little further away. His injury is a little bit more week to week and so he’s probably not going to be there this week. But listen, the season’s young, we’ll get these guys healthy and hopefully we can get things turned around soon.”

Jeffery also hurt his calf during the first quarter of the Eagles loss to the Atlanta Falcons two weeks ago, and the team clearly suffered without him and Jackson in their loss to the Detroit Lions last week.

With Jackson still expected to miss another game, the team will likely be leaning heavily on Jeffery and Nelson Agholor as they head too Lambeau Field