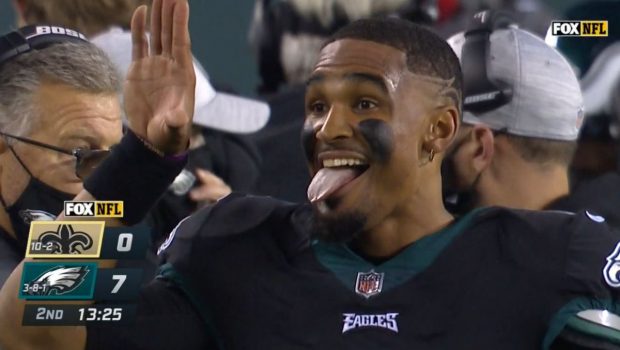 Jalen Hurts’ energized performance that jump-started the Eagles over the heavily favored Saints last night earned him the starting job for the rest of this season.

But Adam Schefter reported yesterday that the Eagles intend to hold onto quarterback Carson Wentz, with the expectation that he’ll continue to be a major part of their team.

Despite his struggles throughout this season, the Eagles still believe in Wentz, 27, as a player and a person, and they think he can return as the type of standout quarterback he once was, according to team sources.

“None of this changes the belief that people have in Carson,” one team source insisted to ESPN this weekend.

Wentz is suffering through the worst season of his five-year NFL career, and the Eagles star currently ranks first in the NFL in interceptions (15) and sacks (46), 31st in completion percentage (58.1%), and 30th in yards per attempt (6.02).

Eagles owner Jeffrey Lurie is not second-guessing Pederson on the switch to Hurts down the stretch, sources said. Lurie's approach he is that he fully supports the coach and won't intervene on in-season decisions.

Eagles coach Doug Pederson left it simple that Jalen Hurts is the starter for this game vs. @Saints but player and team sources believe it is for rest of season, barring injury or disastrous play.
But, as one player noted, it's been a disaster anyway with too many issues to count