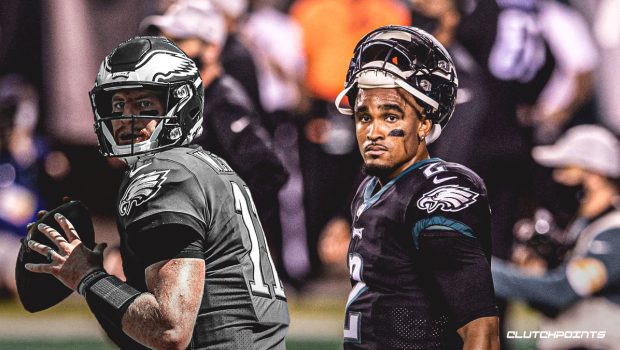 You want to know why the Eagles are finally going to give rook quarterback Jalen Hurts meaningful snaps tonight in place of Carson Wentz?

As Peter King of NBC Sports points out:

The Eagles record since beating New England 41-33 in Super Bowl LII: 22-21-1 (with Seattle, Green Bay and New Orleans in the next three weeks).

Number of times Eagles and their $128-million quarterback have scored 40 points in a game since the Super Bowl: zero.

Another discombobulating game by the quarterback who looks less and less like a franchise player every week.

Against the Browns Wentz threw an ugly pop-up interception that Cleveland linebacker Sione Takitaki returned 50 yards for a TD to open the scoring on a miserable day by Lake Erie.

Then Wentz took a dumb safety to put the Eagles down five in the third quarter.

In a 22-17 game—that was the final in Cleveland’s favor—the quarterback can’t hand the other team nine points.

It left coach Doug Pederson to answer for whether he’s thinking of playing Jalen Hurts now.

But seriously: How can he not be thinking about it?