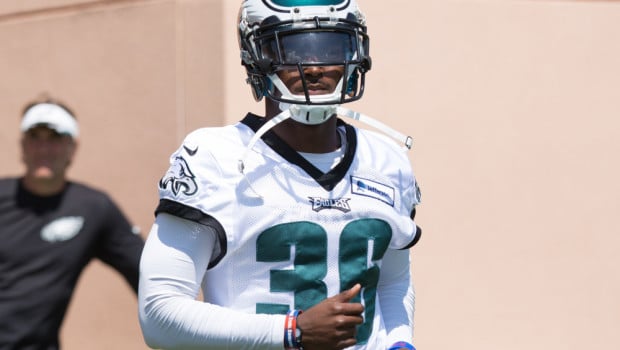 With all the hand-wringing about the Eagles’ sub-standard secondary, fans should remember that:

At this time last year, Jacorey Shepherd was wondering where he would begin his NFL career. Shepherd was selected in the 6th round of the 2015 NFL draft with pick No. 191.

Things got off to a great start for Shepherd as he was on his way to locking down a spot in the Eagles secondary, primarily in nickel packages. Unfortunately, Shepherd tore his ACL last August and missed the 2015 season.

Shepherd walks around the NovaCare Center with a brace on his leg for now. It has been a long process but Shepherd hopes to be able to work out soon.

“I am progressing every week and trying to get better. I want to get my strength and stability back fully. We are not rushing it right now and doing recovery stuff,” Shepherd said. “I will start getting some more individual work in. Depending on how everything goes, if I am still progressing, I may participate in the mandatory mini-camp.”

Philly has addressed the secondary in free agency by signing Ron Brooks and Leodis McElvin from the Buffalo Bills. And the Birds drafted CB Blake Countess out of Auburn.

“Them bringing in guys and looking at guys, it doesn’t bother me. I am a competitor. I love to compete, that’s what I do,” Shepherd said. “I will stay in my lane. I won’t rush. I have faith in my ability.”