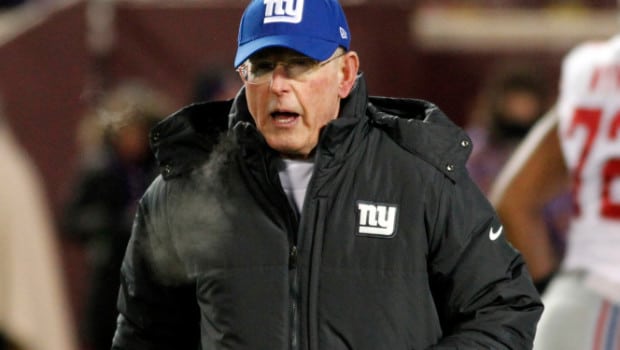 The Eagles regard their business dealings as a matter of national security, so they say nothing on the record about their aimless search for a new coach to replace the fired Chip Kelly.

So, we are left to others to report for us.

In this case, our reporter is New York Giants co-owner Steve Tisch, who told reporters yesterday in Houston at the owners meetings that he was told by Eagles owner Jeffrey Lurie that the Eagles interview with Tom Coughlin (above), who stepped down as Giants head coach earlier this month, went “very well.”

Since Coughlin is technically still under contract (note he “stepped down), the Giants have to grant permission to any team that wants to speak with their former head coach. That’s not a problem. The Giants are not going to stop anybody from meeting and talking with Coughlin.

“Yeah,” Tisch said of it being strange to think about Coughlin coaching a division rival. “But we were not going to not cooperate. Of course he should meet with the Eagles. He should meet with any team that is interested in talking with him.”

Coughlin, 69, made clear his desire to continue coaching, if the right opportunity presented itself. He did not mention the word “retire” in the statement that said he was stepping down.

During his farewell press conference, Coughlin relayed a similar message.

“This is a little different situation today because [my wife] Judy and I, together a long time ago, together we don’t say goodbye, we just say, next time. That’s really what I’m trying to convey here today, as well.”

Why haven’t the Giants talked to Chip Kelly? He’s a brilliant offensive mind, and so far, the names linked to their head coaching vacancy haven’t been awe inspiring.

There may be a next time for Coughlin to continue coaching. He has two options still open, even if it appears he’s a longshot for both jobs.