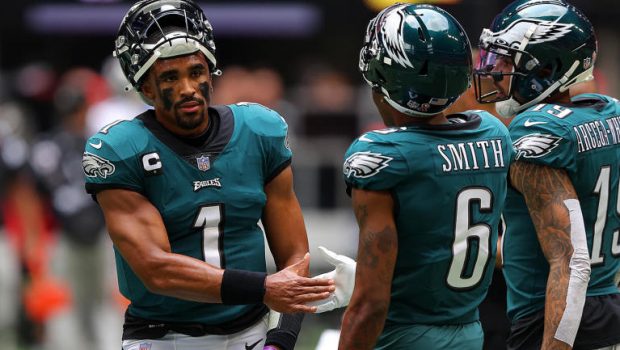 EAGLES HURTS WILL HAVE A FANTASY FIELD DAY AGAINST PANTHERS!

Jalen Hurts has gotten off to a fast start, even if his Eagles have not, going 1-3 with a trip to Carolina Sunday.

Hurts delivered as the Start of the Week in Week 4 at Kansas City with 31 Fantasy points, and he could have had an even bigger outing if not for losing two touchdowns due to penalties.

He’s now scored at least 21 Fantasy points in every game this season, and his floor is safe thanks to his rushing production (at least 35 yards in every game).

This week, he has a tough matchup at Carolina, but Dak Prescott just had 34 Fantasy points against the Panthers, including 35 rushing yards.

Hurts once again should be considered a top 10 Fantasy quarterback in all leagues.