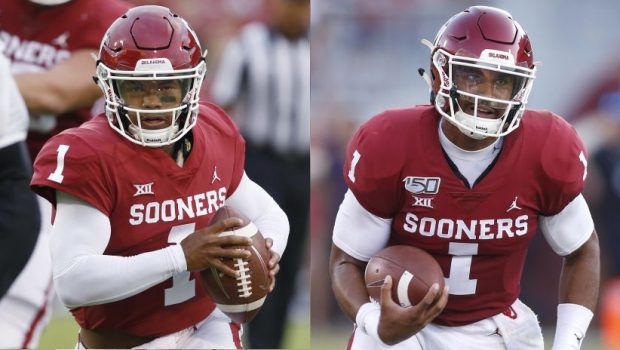 EAGLES HURTS VS. CARDS MURRAY: HAD TO HAPPEN, SOONER OR LATER!

“Kyler is a great player, an OU legend,” Jalen Hurts told the Philly media. “He paved the way for a guy like me to come in there and have an opportunity to put my name in the same air as his.”

The Cardinals (7-6) host the Eagles (4-8-1) Sunday in a game with playoff implications for both teams.

”You may see my face sometimes and it may not look like I’m having fun, but I want to win,” Murray said. ”So once we win we can have fun, we can smile and stuff like that. I love playing football.”

Sunday’s game will be an intriguing matchup between two young quarterbacks.

Jalen Hurts will make his second career start for the Eagles after taking over for struggling starter Carson Wentz. The rookie helped lead the Eagles to a 24-21 win over the New Orleans Saints last weekend, which kept the team’s playoff hopes alive in a murky NFC East.

Now Hurts has to contend with an Arizona defense that played very well in last week’s win over the Giants. The Cardinals had eight sacks, including five from linebacker Haason Reddick.

”For a young quarterback, it can be confusing,” Eagles coach Doug Pederson said. ”Bodies are flashing in front of your eyes, and it makes you sort of drop your eyes and look at the rush a little bit more. We’ll work on it this week as much as we can, and hopefully we can stay out of harm’s way.”