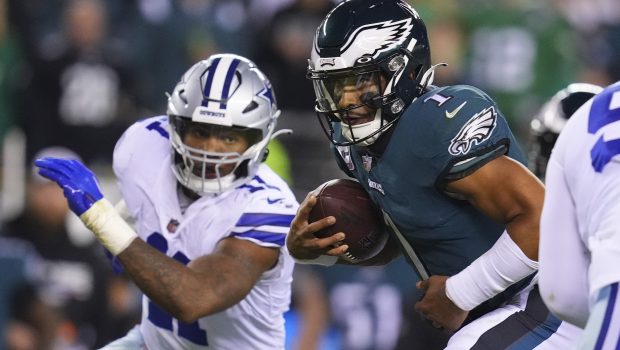 As the 12-1 Eagles get prepared this week to play the 3-10 Chicago Bears Sunday in Chicago, Cowboys linebacker Micah Parson had to reveal how inarticulate some NFL players can be not giving Birds QB Jalen Hurts the proper credit for their best in the league record.

Hurts is the leading candidate for MVP in Vegas presently, rightly so for his amazing play this season.

The Eagles players refused to take the bait to stoke up the Christmas Eve game in Dallas.

Hurts simply said. “We are focused on the Bears this Sunday”.

After making a damn fool of himself the previous day, Parsons admitted yesterday that the Eagles QB has rightly earned his NFL MVP status for the 1st 13 games of the season.

Here’s what he said after the commotion he caused on Von Miller’s podcast:

“I was just having a good conversation with Von, a person I look up to, helped him on his podcast and the next thing I know it’s a shit storm,” Parsons said.

“You see how that goes. We were just talking football. Not once did I ever disrespect Hurts or any other player in any way. I’m just talking football. If football is a hurtful conversation, then what are we playing for? I think the job is more hurtful than the conversation, you know. If we can’t opinions. . . I mean, you guys get to talk shit all day. Why can’t we talk a little chatter? I don’t understand what’s so hurtful when we talk about each other. We’re the players. We play every day. So, I think people should have opinions.”

All in all it matters little what is said before game day, but what happens on the football field that determines the outcome.

Parsons has learned that the hard way.