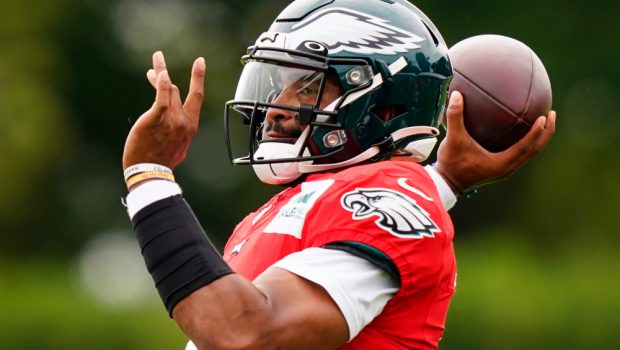 EAGLES HURTS DANCED, D-LINE PENETRATED AT WILL IN JETS PRACTICE!

So, the Eagles and Jets jointly practiced up in Florham Park before Friday’s night final exo.

And according to the New York Post, Eagles quarterback Jalen Hurts danced in end zone after tossing a 1-yard TD pass to Jalen Reagor in a two-minute drill.

The TD was set up by a pass interference call on Jets cornerback Bryce Hall.

And the Eagles defensive line penetrated at will against the Jets’ offensive line.

Jets head coach Robert Saleh reiterated he isn’t concerned about his team’s pass protection, despite what would have been at least five sacks of rookie QB Zach Wilson by the Eagles.

Wilson unofficially completed 10-of-14 passes in 11 vs. 11, but he was pressured into a few poor throws and strip-sacked early in practice. The first-team offense also went three-and-out on its final possession in two-minute drills.