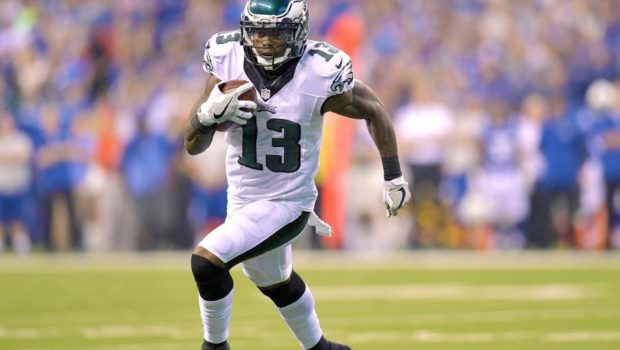 EAGLES’ HUFF CREDITS WIFE FOR HIS STANDOUT GAME AGAINST COLTS!

So, what in the world got into Eagles’ wide receiver Josh Huff, whose exceptional performance Saturday night against the Colts probably ensured his presence on the Birds’ final 53-man roster?

According to Huff, it was his wife’s advice:

Her message? Since I began watching you play, I’ve never seen you this timid. Ever.

He hauled in two passes for 60 yards in the Eagles’ 33-23 win over the Colts, adding a 9-yard touchdown run on the ground culminating in his best game of the preseason.

“She was right. I was playing timid. I wasn’t having fun. With her telling me that, I had to make some changes within myself, and I was able to come out here and have fun with my teammates,” Huff told Phillymag.com. “I think that’s the biggest thing missing for me in the past: Just having fun. I was taking it too much as a business, and that took away from me having fun.

“A lot of (my improved play) goes to my wife. She saw that I wasn’t playing like myself and she was able to tell me. I just had her in the back of my head the whole game, and it was fun.”

Huff, who led both teams in receiving yards, cured his case of the drops — at least for one game. He caught his two targets from Sam Bradford, and he extended both plays after the catch to help set up a pair of scoring drives.