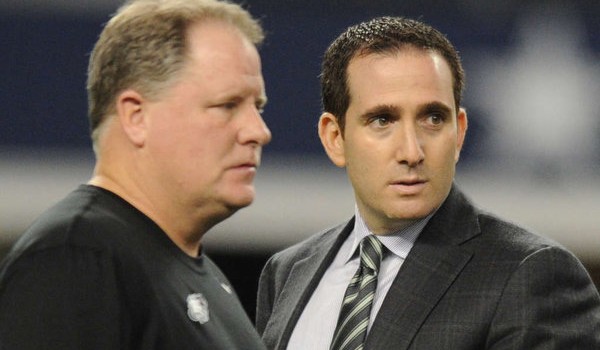 The Eagles and big boss Howie Boy Roseman could screw up a rock fight.

The Eagles plan to trade up for Carson Wentz and sit him for a year with the expectation that he’d be the starting QB in 2017 seems to have been a secret.

They forget to mention any of this to incumbent QB, Sam Bradford, when they signed him.

The Eagles had a plan, but having a non-football guy like Roseman in the front office, he forgot to anticipate something: Bradford will get an $11 million signing bonus, so what’s the incentive for him to report knowing he’s just a fill-in for a year?

According to ESPN’s Adam Schefter, Bradford is so pissed off about the Eagles plan to just play him this year and regardless of what happens, he’s getting replaced by Wentz in 2017, Bradford isn’t attending off-season workouts. Does this mean he wants to be traded?

Probably, but the Eagles simply can’t trade him. Not with all those money issues – Bradford’s got $5.5 million of his signing bonus; the Eagles are on the hook for the other $5.5 million if he gets traded – and not with an actual plan of starting him in 2016 and letting Wentz learn the offense and speed of the NFL.

So what’s the plan? Trade Bradford to a QB-needy team like the Broncos or Jets or 49ers? Ha. Good luck. Maybe you get some future draft picks back, but remember The Plan. If you deal Bradford, you now have career backup Chase Daniel as the starter, with Wentz on deck if Daniel goes down (or just sucks).