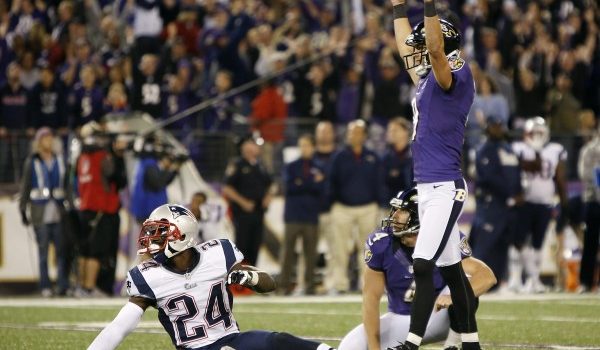 EAGLES HOST PATS ON NOV. 17, AND THEY’RE UNDEFEATED NO MORE!

All of a sudden, the New England Patriots don’t look as formidable to the Eagles, who host the Super Bowl champs on Nov. 17.

Not after yesterday, when their defense gave up a boatload of points in a 37-20 loss to the Baltimore Ravens.

It was the team’s first loss since December 2018.

The Patriots dropped to 8-1, and the Ravens improved to 6-2, tightening the top of the AFC standings. The San Francisco 49ers (8-0) are the NFL’s only remaining undefeated team.

The Patriots’ defense that set numerous records through the first half of the season gave up 155 rushing yards in the first half, falling into a 17-0 hole early in the second quarter. Led by dynamic quarterback Lamar Jackson, the Ravens strung together the longest three drives against the Patriots this season, according to ESPN Stats & Information research.

“We knew they had one of the best running attacks in the NFL this year and they were able to really run the ball, we struggled stopping the run, and it pretty much gave them control of the game,” safety Devin McCourty said. “They were able to play it on their terms, and that’s what hurt us the most.”

Jackson, 22, becomes the youngest quarterback in the Super Bowl era to defeat a team that entered the game 8-0 or better. That mark previously belonged to Mark Sanchez, who took down the 14-0 Colts in 2009 (Peyton Manning was pulled in the third quarter when the Colts were leading).

Jackson finished 17-of-23 for 163 yards with one touchdown, adding 61 yards on 14 carries. Running back Mark Ingram totaled 116 yards on 15 carries, a performance highlighted by a 53-yard run at the start of the second quarter.

One question lingered over the Patriots throughout their 8-0 start: How would they respond when the competition elevated?

In a game that featured a playoff-type atmosphere, they got off to their worst start of the season before they fought back and showed mental toughness that should serve them well as they head into the final stretch of their schedule following next weekend’s bye. The quality of opponents the Patriots face remains at a high level the next four games: at Eagles, vs. Cowboys, at Texans and vs. Chiefs.

“Losses always find a way to recalibrate how you see yourself. And we obviously have a lot of work to do,” said quarterback Tom Brady, who finished 30-of-46 for 285 yards while one touchdown and one interception while directing an up-tempo offense. “So just wasn’t obviously good enough. Get beat by 17 points, that’s not what we’re all about. I give the Ravens credit. I think they played really well, took advantage of their opportunities. And that’s what it takes.”

Belichick often says no statistic correlates more to the end result of games than turnovers, and two recovered fumbles helped get the Patriots back into the game in the first half. They closed to 17-13 at the half and looked primed to take the lead early in the third quarter when receiver Julian Edelman lost a fumble, and the Ravens’ Marlon Humphrey returned it 70 yards for a touchdown.

Instead of possibly going ahead 20-17, the Pats trailed 24-13. At a time when their margin for error was already thin, they dug too big of a hole to recover from and trailed the remainder of the game.

“You can’t turn the ball over against a team like that when they can hold the ball that long,” Edelman said, in reference to the Ravens’ time-of-possession advantage of 37:01 to 22:59. “I felt like I let my team down, but you have to move on. It just wasn’t our day. You have to tip your cap to the Baltimore Ravens. They played a good game.”