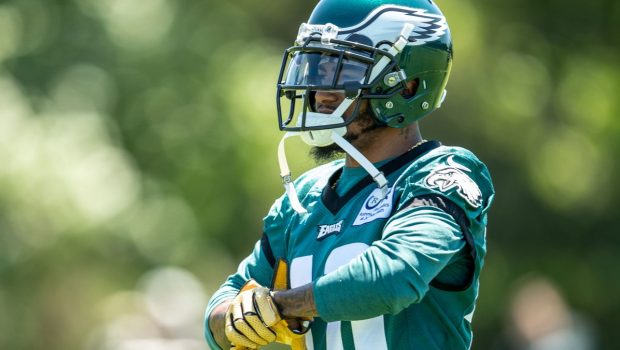 EAGLES HOPES ARE SKY-HIGH AS CAMP STARTS THIS WEEK!

The Eagles haven’t played a game in anger since they lost to the Saints last January in the playoffs.

And they have had a productive off-season, so expectation are high as they gather on Wednesday at NovaCare in South Philly and begin training camp on Thursday.

Biggest newcomers: The Eagles went back in time to sign WR DeSean Jackson (above), one of their former stars and a pass-catcher able to stretch any field and threaten any defense with his speed.

A trade with the Bears for RB Jordan Howard brings in a three-down runner, and Howard is likely to emerge from the committee, as he is versatile enough to do so.

DT Malik Jackson was signed from the Jaguars to fortify the interior of the defensive line. DE Vinny Curry, another former Eagles player, was re-signed to add depth to what was the deepest defensive line in the league.

Biggest losses: The defensive line took a hit with the departures of Haloti Ngata and Chris Long, who both retired, and the loss of Michael Bennett, who took his nine sacks to the Patriots.

Losing LB Jordan Hicks is also a blow. WR Golden Tate, after a productive run with the Lions, did not do much in half a season with the Eagles and signed with the Giants.

The biggest loss of all could be QB Nick Foles, a super-sub who won a Super Bowl and nearly got to another subbing for injured Carson Wentz. Exec Tom Coughlin summoned Foles to save the Jaguars, and the Eagles hope Wentz can stay healthy.

Camp outlook: Once again, the Eagles head to camp as one of the more talented teams in the league, but they do not appear to be as deep as they were the past few years.

All eyes will be on Wentz, who was a favorite to win the MVP award in 2017 before he blew out his knee and has tried to regain that form ever since — with a back injury his most recent malady. If he is healthy, expect the Eagles’ offense to soar, operating Pederson’s creative scheme.

A new defensive line rotation will have to be found, and that is a task well-suited for the summer. The offensive backfield also needs to sort itself out, with Howard the newcomer joining a group that includes Corey Clement and rookie Miles Sanders from Penn State.