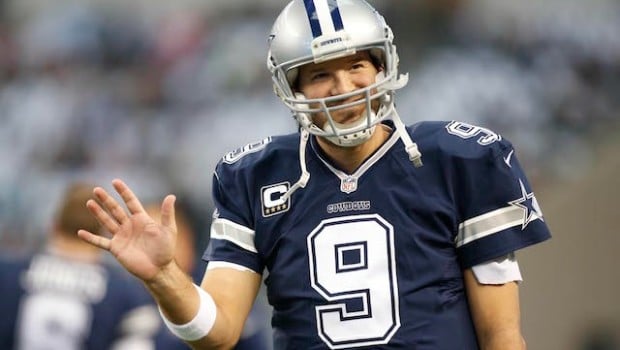 The Eagles are predicted to go 5-11 by the dopes at ESPN, but they’ve got two advantages in their 2016 bounce-back season under new coach Doug Pederson:

They play in the NFC East, the worst in the NFL.

Dallas owner Jerry Jones is still in charge of the dreaded Cowboys’ personnel!

The Cowboys might take a quarterback with the No. 4 pick in this month’s draft, but their immediate future is tied to the health and well-being of Tony Romo, who will be 36 next week.

So this is certainly good news: Romo has the green light to take part in offseason workouts, which begin Monday. In fact, he’s been working out on his own for longer than that.

“It’s been going great here for the last two, three weeks –- just getting them going and being able to go full speed and all that stuff. It’s been great,” Romo said, according to the Cowboys’ website.

Romo, who twice fractured his left clavicle last season, underwent a Mumford procedure on March 8 to shave down the clavicle and alleviate stress on the bone. And while recovery time can be up to two months, he will be a full participant in offseason workouts.

“I can throw fully. I’ve been throwing fully here for a good week and a half, two weeks. It’s been good,” Romo said, adding that he’s had an opportunity to throw to wideout Dez Bryant, whose 2015 season was also cut short by injury.

Romo’s injury coincided with the Cowboys’ lost season. Backups Brandon Weeden and Matt Cassel both flopped, and the team’s four wins no doubt left owner and general manager Jones wondering if he should have had a more reliable contingency plan.

Either way, Romo sounds upbeat about his long-term future in Dallas.

“It’s as strong as it’s been in three or four years,” he said back in January. “That’s exciting because you don’t know that when you first go through some of the back troubles early on and have surgery, you don’t know how it’s going to come out, but I’m seeing a very strong side to it now where I’m able to do things that I wasn’t able to do even last year. That’s exciting to me.

“I feel like the joke is, I’ve said it before, as everyone else is getting older, I’m getting younger. You just got to go out and do it and prove it. I think next year you’ll see a little bit different Dallas Cowboys team.”

Jones, one of Romo’s biggest supporters, agrees. At January’s Senior Bowl, he said, “We have the luxury of having Romo here for three, four, five more years.”