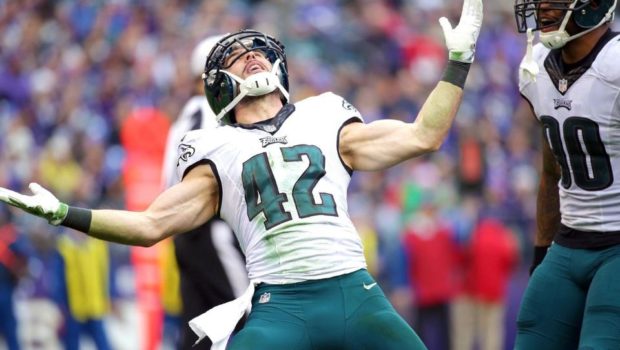 EAGLES ARE OUT, HERE’S WHO’S STILL IN NFL PLAYOFF RACE

The Eagles were eliminated from the playoffs yesterday with their 27-26 loss at Baltimore, and here is who still alive:

AFC
yz-1. New England Patriots (12-2): AFC Eastchampions. They’re division winners for the eighth consecutive season. After locking up a bye yesterday, they could wrap up home-field advantage in Week 16.
x-2. Oakland Raiders (11-3): AFC West leader. The Silver & Black punched their first playoff ticket since 2002 and are back in position to nail down a bye, which could be clinched in Week 16.
3. Pittsburgh Steelers (9-5): AFC North leader. They’ll clinch the division by beating the Baltimore Ravens on Christmas.
4. Houston Texans (8-6): AFC South leader. Now 5-0 in the division, they maintain the tiebreaker advantage despite quarterback questions and sharing first place with theTennessee Titans. However if either team wins out — they meet in Week 17 — it will take the crown.
5. Kansas City Chiefs (10-4): Wild card No. 1. Their loss to Tennessee knocked them out of the division lead and prevented a playoff clinch. But a win against the Denver Broncos on Christmas will assure Kansas City a spot in the field.
6. Miami Dolphins (9-5): Wild card No. 2. Their win over the New York Jets on Saturday night combined with the Broncos’ loss Sunday puts the Fins in the field for now.

NFC
x-1. Dallas Cowboys (12-2): NFC East leader. One more win will give them the division and home-field advantage.
y-2. Seattle Seahawks (9-4-1): NFC West champions. Thursday night’s win wrapped up the division and guarantees a playoff game at CenturyLink Field. Detroit’s loss put Seattle back into position for a first-round bye.
3. Atlanta Falcons (9-5): NFC South leader. They moved ahead of the Lions courtesy of a stronger strength of victory tiebreaker.
4. Detroit Lions (9-5): NFC North leader. Their loss in New York deals a blow to thoughts of winning their first division title since 1993 and costs them control of earning a first-round bye. But the Lions are still in control and would clinch the NFC North by beating the Cowboys in Week 16 combined with a loss by the Green Bay Packers.
5. New York Giants (10-4): Wild card No. 1. Their hopes for the NFC East crown remain alive. They clinch at least a wild-card berth by beating the Eagles on Thursday.
6. Washington Redskins (7-5-1): Wild card No. 2. They’ll have to beat the Carolina Panthers on tonight to hang onto this spot. Otherwise, it goes to the Packers (8-6), who would edge the Tampa Bay Buccaneers on the strength of schedule tiebreaker.