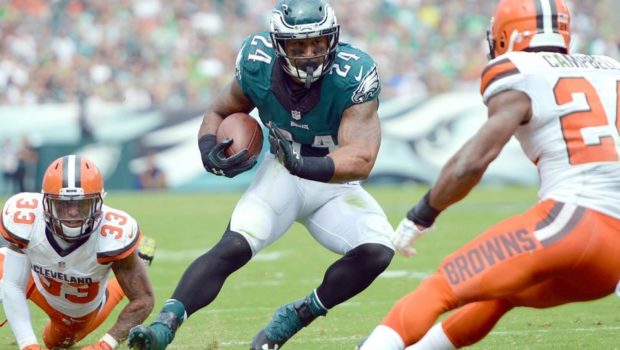 Ryan Mathews. The Eagles had a bye week to help Mathews’ sore ankle heal. He’s practiced fully this week so feel free to get him in your lineup vs. Detroit. Wendell Smallwood will see some touches, but isn’t a fantasy factor just yet.

Tom Brady. We’ve seen plenty about him over the past week. (In some cases, too much.) But it’s also hard to overstate how much Brady means to the effectiveness of the New England Patriots offense. Last year, they ranked sixth in total yards. So far this year, they’re tied for 19th. Getting TE Rob Gronkowski closer to 100% should help as well.

Cam Newton. It’s not official, but signs point toward the reigning MVP not clearing the NFL’s concussion protocol by the time the Carolina Panthers take the field on Monday night. Don’t wait until the news is official; get someone else in your lineup or if nothing else, pick up backup Derek Anderson.

Latavius Murray. He’s dealing with a painful turf toe injury, and was officially declared out on Friday. DeAndre Washington and Jalen Richard are expected to split carries in Murray’s absence.

Tyler Eifert. Recovering from offseason ankle surgery, it looked like he was on track to make his 2016 debut in Week 5. But now a back injury has cropped up and he’ll sit out at least one more week. C.J. Uzomah and Tyler Kroft are non-factors.

Eric Decker. A separated shoulder is still causing him pain and he hasn’t practiced at all this week. With the Pittsburgh Steelers ranking 30th vs. the pass through the first four weeks, Quincy Enunwa should be a WR2 in most fantasy formats.

Stefon Diggs. Make alternate plans if you’re planning to start him. He hasn’t taken the field all week because of a groin issue and that’s a bad sign, especially vs. theHouston Texans, who rank No. 1 against the pass.

Dan Bailey. Yeah, we don’t usually worry about kickers, but he’s having trouble with his back and may not be able to suit up. The Cowboys kick off at 4:25 ET so don’t get caught taking an unnecessary zero from your kicker.