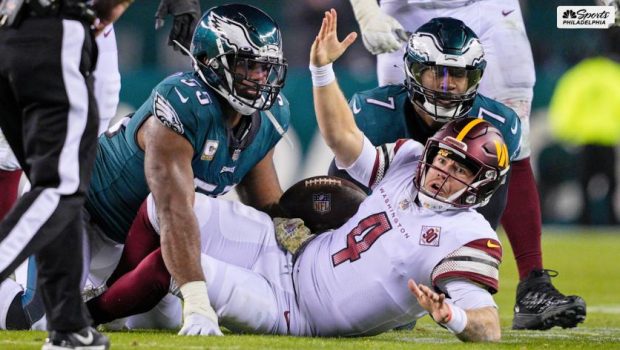 The Eagles lost their first game of the season on Monday night.

And, aside from the gloom and doom from the usual characters in the lame-ass local media, The Athletic noticed:

After winning the turnover battle in each of their first eight games, everything finally went against Philadelphia in its surprising Monday night loss.

A costly fumble on an uncalled face mask penalty, another after a 50-yard completion to Quez Watkins that looked like it might set up the game-winning score, and a borderline unnecessary roughness penalty on Brandon Graham after Taylor Heinicke gave himself up late that was either genius or cheap, depending on your perspective.

Those were bad breaks bound to happen at some point, even if Nick Sirianni insisted last week that “luck has nothing to do with” their turnover fortune.

Of greatest concern is the passive run defense the Eagles have rolled out since rookie nose tackle Jordan Davis went on injured reserve.

They have surrendered 320 combined rushing yards over the past two games.