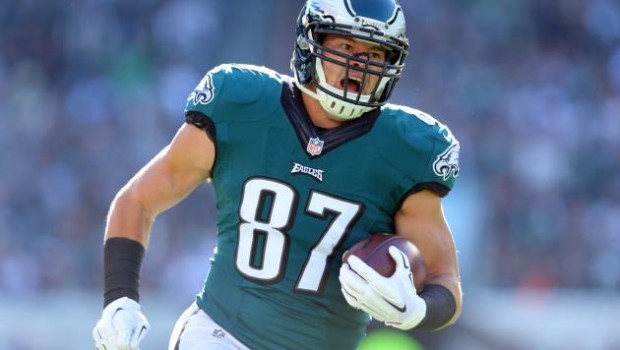 EAGLES HAVE THE BEST TIGHT END TRIO IN THE NFC EAST

It’s too soon to tell how these reconfigured Eagles will fare in the NFC East this fall.

But one thing is certain:

They have the best tight ends in the division.

Brent Celek (above) is extremely consistent in both blocking and receiving while Zach Ertz could push for a Pro Bowl nod in 2016. Trey Burton should contribute as well.

Jordan Reed headlines the Redskins tight end room and is followed by Niles Paul and Logan Paulsen. JReed is the best tight end in the division if he can stay healthy, but if he goes down, the position is in trouble.

A young Jason Witten was just about unstoppable, but the problem is he’s not young anymore. Behind him is Gavin Escobar, who looks the part of a reliable tight end but has never really developed as a pass catcher.

The Giants are undecided who their starter will be this year as Larry Donnell, Will Tye, and Jerell Adams fight for the spot. This group is less than impressive.