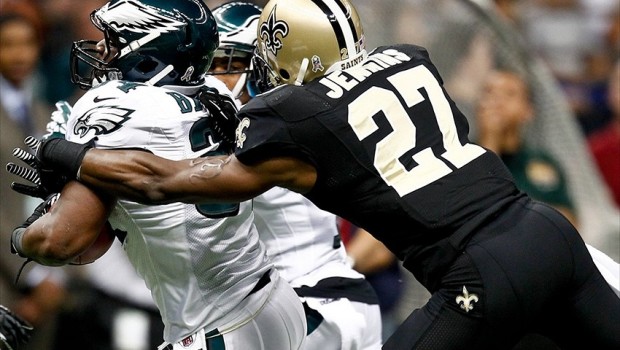 EAGLES HAVE SAFETIES IN NUMBERS

Free agent Malcolm Jenkins (above, against the Eagles) fits into defensive coordinator Bill Davis’ scheme, and so do Nate Allen and rookie Ed Reynolds

The Eagles’ decision to pass on Jairus Byrd, the top-rated safety in free agency in March, to sign the less expensive Malcolm Jenkins, who was replaced by Byrd in New Orleans, is a bone of contention in Eagles Nation.

But the Eagles believe they made the right decision. While Jenkins’s more affordable free-agent price tag – he signed a three-year, $15.5 million deal with the Eagles that includes just $8.5 million in guaranteed money, while Byrd signed a six-year, $54 million deal with the Saints that included $26 million in guarantees – certainly was a factor in the Eagles’ decision, so to was the fact that they believe Jenkins is a better fit for their defense.

While Jenkins isn’t the ballhawk that Byrd is, he brings more versatility to the position, which is important in defensive coordinator Bill Davis’ scheme. A former cornerback, Jenkins is a better one-on-one cover safety than Byrd. He can drop down and cover a slot receiver. He can cover tight ends.

In addition to signing Jenkins, the Eagles also re-signed safety Nate Allen to a one-year deal. Second-year man Earl Wolff, who started nine games as a rookie, will compete with Allen for the other starting safety job next to Jenkins.

The Eagles also drafted a safety, Ed Reynolds of Stanford, in the fifth round and signed another free agent safety – ex-Seahawk Chris Maragos. So they think they have dramatically upgraded the position on a defense that finished 32nd in the league in pass defense last year.

“I think it’s just a young defense that wants to be great, that works hard,” Jenkins said. “Right now, we’re just trying to gel as a unit, feeling each other out. But that’s what we’re building.”

Jenkins thinks his cover skills are perfectly suited for the Eagles’ defense, which doesn’t put a heavy run responsibility on its safeties.

“You have to be all over the place and know every (defensive backfield) position,” he said. “One, you have to have the athletic ability, then you have to be intelligent enough to kind of learn those different positions on the field.

“Those are the things I enjoy. I watch a lot of film. I really enjoy it, and me and Nate also have sat down. … we’ve just talked about how we see the defense playing out, how we can use different tools to match up against offenses so that we’re always on the same page.”