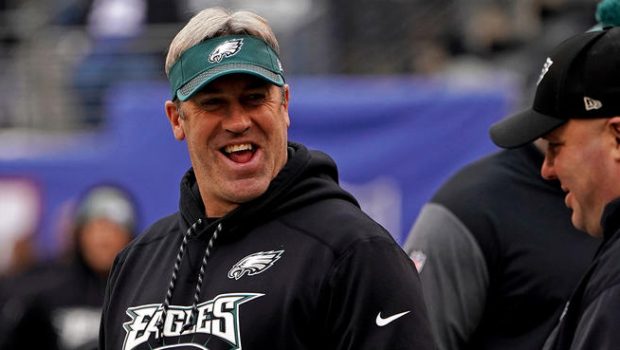 Eagles coach Doug Pederson is headed to the Combine in Indy, and he appeared on the team’s podcast to answer a few questions:

Coaching hires: Andrew Breiner: “Someone who can fill that mold of pass-game analyst. Which is what I want him to do — I want him to analyze our passing offense. He doesn’t have the pressure of coaching a room. He can study our offense, study offenses around the league, he can study college offenses and bring us some fresh ideas and thoughts on things he has done in his career.”

Rich Scangarello: “Really, really was intrigued by his resume and where he has come from. How he has worked himself up in this league. He was a coordinator last year in Denver. He has worked with Kyle Shanahan in San Francisco. He has worked with quarterbacks, he was with Kyle in Atlanta. He started as a quality control coach like myself.”

Duce Staley: “He is the assistant head coach, let’s not forget that,” Pederson said. “He is my right-hand guy.”