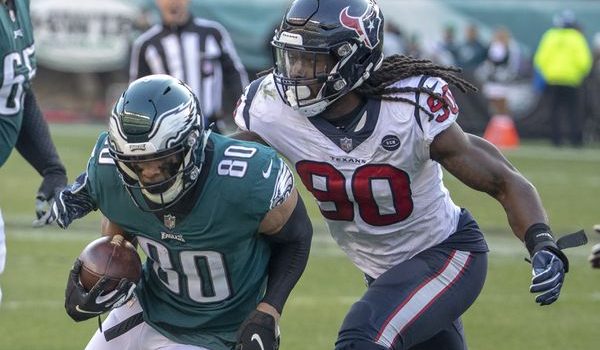 EAGLES HAVE MADE THE FINAL 2 FOR JADEVEON CLOWNEY!

Eagles fans should take heart this morning after a woeful 6-0 exo loss to the Jets:

According to Aaron Wilson of the Houston Chronicle, the most significant discussions have come with the Miami Dolphins. However, the Texans have also spoken with the Eagles, Seattle Seahawks, Washington Redskins and New York Jets in regards to the standout pass rusher.

“Nothing has advanced” with any of the teams outside of Miami at this point. Additionally, any trade with Washington appears to be dead as they won’t part with left tackle Trent Williams.

Clowney reportedly prefers the Eagles or Seahawks as possible destinations.

Clowney cannot be traded without first signing his franchise tag tender, which gives him leverage in the discussions as long as he’s willing to remain home and not report to the Texans. Additionally, Clowney doesn’t currently have an agent representing him after firing Bus Cook. Clowney has met with Dolphins head coach Brian Flores after the Texans gave the two sides permission to do so.

Getting all of the variables to come together in such a way that everyone can feel satisfied may be a tough ask. Even if a trade comes together, that team won’t be able to negotiate a new contract for Clowney until after the 2019 season with no guarantees Clowney will spend more than one season at his new destination.